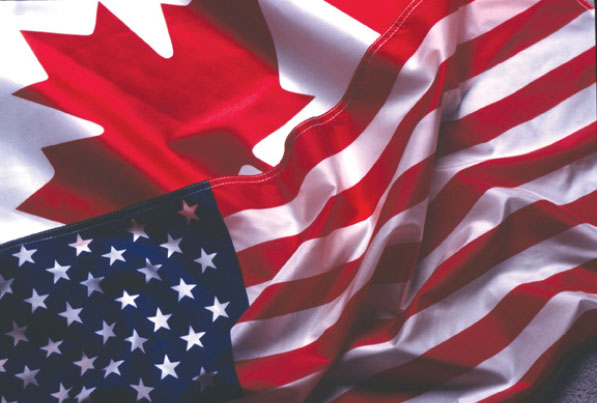 As the life sciences industry has produced substantial new innovations, some states have struggled to keep up with the costs of the latest pharmaceutical products. Vermont, with its small aging population of around 600,000, has been particularly affected by the growing cost of drugs. In looking ways to manage this challenge, the state has turned to a nearby source of cheap drugs – across the border in Canada. While many states have considered importing drugs from abroad to secure lower prices, in May of last year Vermont became the first to pass a law proposing this approach.

This law was well covered in the media, with reactions from industry firms and federal officials, however there has been relatively little follow-up as Vermont prepares to put this plan into action. As such, CBPartners has completed research into the status and feasibility of this importation program. We’ve found that the plan is well covered by local media, but that its relevance nationally has diminished. This is likely due to a report which was released on the last day of 2018, which had a surprising conclusion: the plan won’t save much money.

Before we dig deeper into this surprising report and its implications for the importation program, it is important to understand the broader legal context. While the idea of importing drugs from abroad has become a popular idea in health policy recently (driven by the media spotlight on drug costs), in reality importation has been a legal possibility since 2003.

The Federal Food, Drug, and Cosmetic Act was updated in 2003 and included language to enable importation in Section 804, with the requirement that the Department of Health and Human Services would have to certify that any such program would not pose a risk to health and would provide significant cost reductions. In addition to this general requirement, there were several built in restrictions based on categories of drugs, including infused or biologic products. No approvals would be granted for these products based on safety or cost grounds, these products are simply excluded from the scope of importation. This limitation notwithstanding, once the legal authority was there, several states considered such a program. Vermont is simply the first to push such a bill across the finish line into law and is now serving as a pilot for the rest of the nation.

Review of the Vermont Law

Vermont’s law was carefully constructed to be compliant with the federal regulations, well aware of the need for federal certification. The law ordered the creation of an agency to act as a wholesale importer, and to set up programs that would ensure that drugs imported are only those which would be safe and allow for substantial savings for Vermont. This wholesaler would be allowed to sell these imported products as a licensed entity in Vermont but would not be allowed to sell these products outside of the state. From a funding perspective, this wholesaler and monitoring programs would be financed via a small tax on each prescription.

While many of these design aspects are straightforward, one aspect that is not specified in the law (but is implied) is that it will not consider infused or biologic products. As described above, federal certification would not be granted for any such program, and the Vermont law specifies they will be federally compliant. This severely curtails the scope of the program, as infused or IV products and biologic products represent the lion’s share of drug spending, especially in high-cost disease areas like oncology / rheumatoid arthritis . However, there are still many opportunities for savings, as highlighted by the Vermont legislators who passed the bill – they point to extreme examples of products with prices over 10 times higher in the US vs. Vermont.

With these kinds of opportunities available, why then did a recent report find that the program is only anticipating minor savings: just 3.8% of total drug spending in Vermont?

To understand why the projected savings are so low, let’s dig into the details of the released report. Authored by the National Academy of State Health Policy (the same organization that drafted the law for Vermont), they intentionally limited the scope in several ways. Firstly, they worked with the two commercial insurance companies in Vermont (Blue Cross Blue Shield and MVP) to identify the drugs that are currently creating significant spending. They finalized a list of 17 high-impact products, excluding of course biologics or infused products.

NASHP (National Academy for State Health Policy) then sought to compare the Canadian prices of these products to the cost that would be achieved through importation. The Canadian prices were pulled from a public database in Quebec, though it is worth noting that these were the publicly available list prices. These are different from the net prices being paid by the Canadian healthcare authorities, which would also incorporate confidential discounts negotiated between the government and manufacturers. These discounts vary, but are a significant savings to the system. For these analyses, NASHP took the list prices and adjusted them to approximate the likely prices which the import system would achieve. To do so, they simply applied a 45% mark-up on the list Canadian price. This would allow for a 20% profit along the supply chain, and was intended to account for additional costs of the program including testing, record keeping, etc.

These “new” prices were then provided back to the health plans, in order to calculate what their “new” spending would be if they could import the drugs. The plans applied these prices to their existing utilization numbers for these drugs and found that their savings came to roughly USD 2.61 – 2.82 per member per month, or USD 1- 5 million per year. While not specified in the report, CBPartners’ analysis of these data in the context of the Vermont health insurance landscape indicates that this is a per-insurer savings, for a potential best-case savings of USD 10 million total.

While USD 10 million certainly sounds like a lot up-front, it is again important to place that number in context. To understand the existing spending benchmark, we looked to a report from the Green Mountain Care Board of Vermont. Their analysis showed that in 2016, commercial insurers spent 13.7% of their healthcare dollars on prescription drugs, for a total of almost USD 270 million dollars. This is where our earlier figure of 3.8% comes from – reducing the expenditure by USD 10 million still leaves 96.2% of spending on the table.

3.8% savings for importation of the top 17 highest-spend drugs is not an encouraging outlook for this program, and it pales in comparison to the examples highlighted by the advocates of the law and their 10-fold pricing disparity. Additionally, this would be savings to the commercial insurers, and would not account for the costs to the state of monitoring and regulating this entire process – sure to be significant.

To further pressure-test the analysis of Vermont’s pricing outcomes, we’ve introduced two products which one would assume would have a large impact on drug costs – biologic rheumatoid arthritis drugs, HUMIRA™ (adalimumab, $ABBV) and REMICADE™ (infliximab, $JNJ). These are widely used for a variety of inflamation-related diseases (HUMIRA itself is the best-selling drug in the world) but as biologics they are excluded from the scope of the Vermont importation program. While these two examples seem to show very different outcomes, further analysis reveals that both are bad news for the Vermont program’s potential. 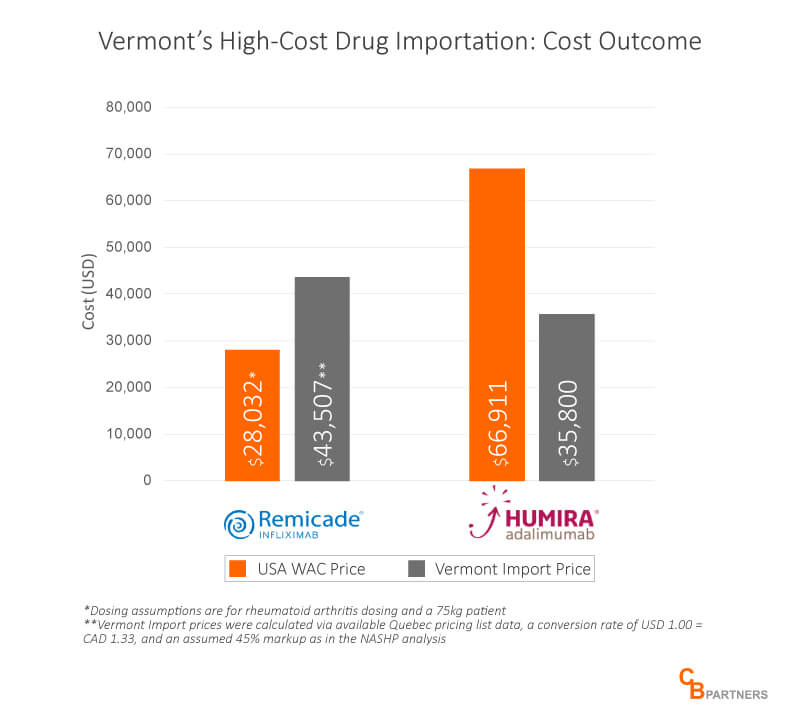 In the first example, REMICADE™ can be seen at an outright loss – the product’s list price in Canada is sufficiently high that importing at the assumed 45% import markup rate would actually be more expensive than buying in the US. However, looking to the second example, the perceived large discount that could be achieved on HUMIRA™ is misleading. The USA prices here are WAC prices, independent of any health plan discounts. Contracting on HUMIRA is known to be highly aggressive and is likely in the range of 30-40+% off of the WAC price, which would reduce the savings to effectively 0% in that case. Thus, for both of these highly important products, the projections show that importing them from Canada would not likely yield any savings.

CBPartners believes that this current version is unlikely to save the state and its patients much money, if anything at all. Even at greater scale, say with a New England Importation Alliance or something similar, there’s no reason to believe that the savings would somehow materialize – the differences in price are exogenous to the program. The 45% markup employed by NASHP may be conservative but seems appropriate given the highly regulated nature of drug labelling, packaging, and channel discounts.

A key factor here is of course the federal restriction on which products can be included. Biologics and infused products may generate variable savings if imported, given greater disparity in prices across countries and that many of these products top the spending charts. However, based on CBPartners’ analysis:

In summary, simply crossing the border into Canada does not ensure that you will gain access to the discounts that are negotiated by Canadian regulatory authorities. Their healthcare system is complex and well contained, and Americans cannot simply plug a hose in and siphon off savings. As Vermont pushes forward with their pilot, CBPartners will continue to monitor their success in achieving savings, and how other states respond. If the program proceeds as projected, we anticipate other states will consider alternative options to lower drug costs.