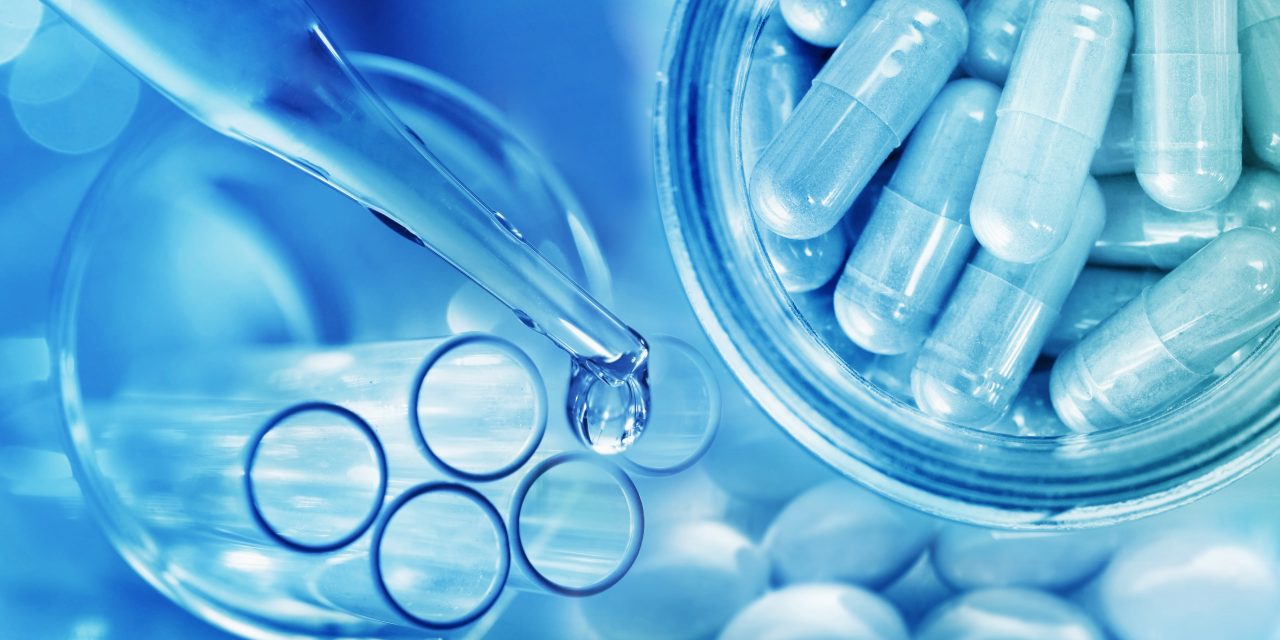 As a class, manufacturers of PDxs (PD1s / PD-L1) are enjoying great success when it comes to marketing authorisation, with four of the five brands achieving multiple FDA and EMA approvals.  These groundbreaking therapies display versatility across tumour types, which gives patients great hope (just ask former President Jimmy Carter) for their devastating diagnoses.  The momentum building within PDx developers has led to even greater research investment.  KEYTRUDA™ (pembrolizumab, $MRK) leads the pack with 11 tumour-types being investigated through late-stage trials – a number that grows to 50 (or more) when taking into account combination regimens, different lines of therapy, and earlier stages of development.  The most consistent wins have been in urothelial cancer and NSCLC (non-small cell lung cancer), with five and three PDx approvals, respectively.  We anticipate that this trend will continue, with these brands expanding their labels across even more tumours over the coming years. 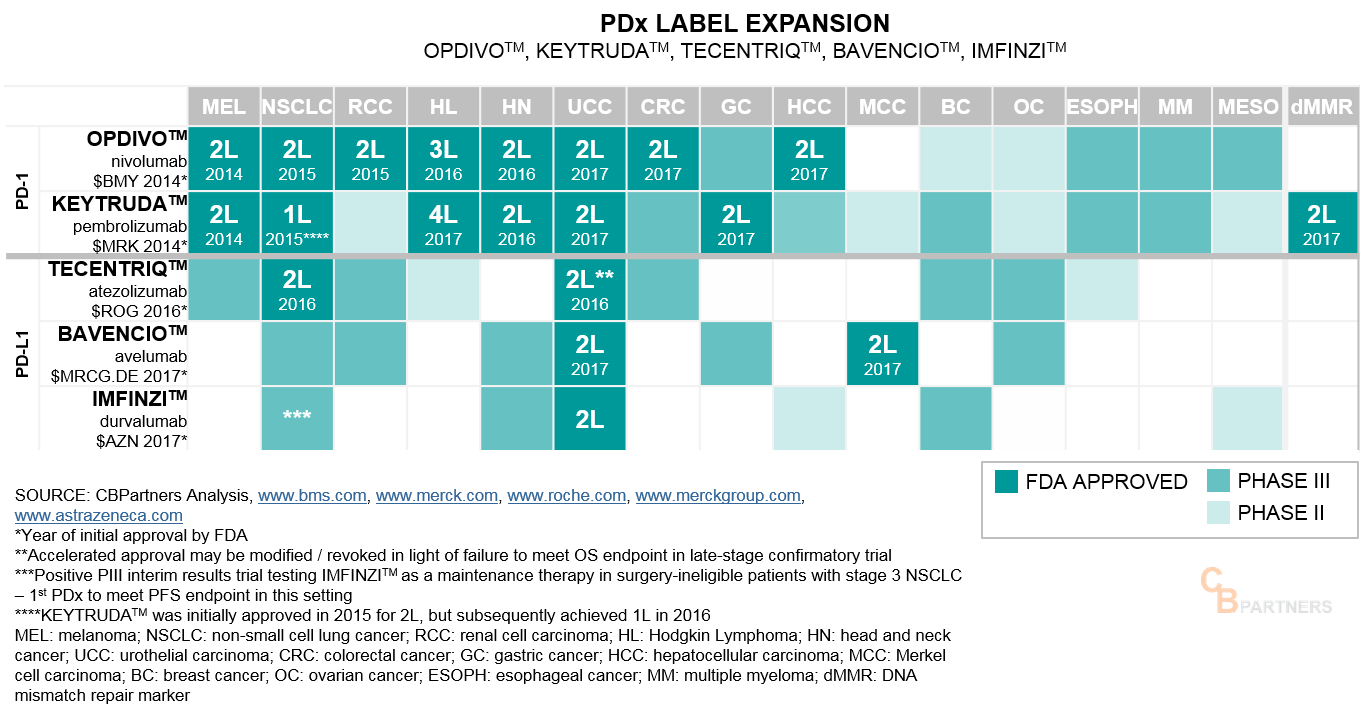 The approvals and plans in PDx label expansion

However, understanding where these PDx brands are failing is just as important as where they are succeeding.  In monotherapy, we have seen failures from OPDIVO™ (nivolumab, $BMY) in first-line lung cancer, TECENTRIQ™ (atezolizumab, $ROG) in second-line bladder cancer, and most recently KEYTRUDA™ in head and neck cancer (HN).  On top of these disappointments, $BMY failed on its effort to combine OPDIVO™ with its own YERVOY™ (ipilimumab, $BMY) in renal cell carcinoma.  These failures are important because they are post-approval trials conducted to confirm the FDA’s decision to fast track and approve the therapy for the indication based on limited evidence.  In these cases, the FDA will usually require that the manufacturer demonstrates some additional benefit in the future, which often involves an overall survival benefit beyond current standard of care.  These failures cast doubt upon the previously held confidence the FDA placed in the PDx therapy based on promising but immature evidence.  Beyond concerns among patients who have been placed on the therapy in question, the market is also jolted due to the risk that the FDA could rescind the label approval for the indication in question.  Indeed, there is precedent for this action, as was witnessed in the case of AVASTIN™ (bevacizumab, $ROG) in metastatic breast cancer.  The impact of such a move for the PDxs in question would be devastating for everyone involved (the discrepancy is centered around efficacy, not safety), but the FDA is unlikely to withdraw the label approvals – at least for now.  What is more likely is that the agency will simply apply more caution  to award accelerated approval status to PDxs moving forward.

In the meantime, though, these post-approval trial results are alarming, and the question of what is driving these failures looms ominously over the PDx market.  Given that the PDx mechanism is similar across these products, the expectation held by many was that success in a given indication for one product in the class would predict the success of others – a so-called ‘class effect’.  However, reality now bears out that this is far from the case.  There are two main hypotheses to explain this development – the trials of some PDxs are improperly designed, and / or the PDx class carries no class effect, and really does have significant variation among its members.

If these failures are driven by faulty trial design, it would spell trouble for the significant investment these companies have already made in other trials with yet untold results. Adjusting a trial design in midcourse is difficult, especially when the most likely culprit is patient eligibility. In the NSCLC example of OPDIVO™ and KEYTRUDA™, it is a popularly-held belief that $MRK’s decision to use the PD-L1 biomarker to define patient selection for their KEYTRUDA™ trial that led to their success in a targeted population.  On the other hand, $BMY was unable to demonstrate PFS or OS benefit in a broader patient group for OPDIVO™.  While this lesson will likely be incorporated into future study designs, it may be years before any adjustment to future trials will lead to results that prove this approach to patient selection is the right one.

If the source of these failures is more intrinsic to the therapy itself – indicating that molecular differences across PDxs leads to differences in how they attack tumours – the implications and steps to mitigate them are less clear.  New evidence supporting this theory recently surfaced through $MRK’s  second-line NSCLC trial for KEYTRUDA™, where its use in combination with $INCY’s epacadostat was investigated.  Not only was the PFS data superior to OPDIVO™’s melanoma combination with YERVOY™, but OPDIVO™ and YERVOY™ were tested in treatment-naïve patients, whereas this KEYTRUDA™ trial included patients pre-treated with non-PD-1 therapies.  Essentially, the bar was higher for KEYTRUDA™ – and the results should have been similar to the OPDIVO™ + YERVOY™ study.  If this trend of differential activity and trial results continues, understanding what drives the perception of interchangeability (versus simply similarity) among clinicians, payers, and other stakeholders should be undertaken.

Such an analysis can be performed by assessing other classes with highly similar mechanisms of action.   One area of exploration could be proteasome inhibitors used in multiple myeloma.  VELCADE™ (bortezomib, $TAK), KYPROLIS™ (carfilzomib, $AMGN), and NINLARO™ (ixazomib, $TAK) are not considered interchangeable despite the commonality of their class.  The difference here could be that they target slightly different proteasomes in the cell, or perhaps their diverse safety profiles are distinct enough to warrant this perception of differentiation.

On the other hand, classes like statins and ACE inhibitors are considered to be interchangeable, despite obvious molecular differences.  This perception could be driven by the relative disease severity in question – perhaps stakeholders are more comfortable declaring interchangeability in a chronic condition like heart disease, relative to the fast-moving and precarious cases in oncology.  Exploring the history of other classes could be important to understanding how stakeholders will evolve their perception of the PDx class over time.

With a two-year head-start on all other PDxs, OPDIVO™ and KEYTRUDA™ set the standard for pricing and access.  Both had their initial launch in the USA, indicated for melanoma, and were priced at around USD 13,000 per month (NOTE: PDx cost of therapy per patient is highly variable, and depends on median duration of therapy and dosing for the tumour type in question).  Since then, both brands followed a rigorous and eventful path to label expansion, as well as ex-USA price reduction – but not without some differences in indication sequencing and discounting strategy.

OPDIVO™ led the way in most indications, today holding both renal and urothelial indications that KEYTRUDA™ lacks. Throughout their commercialisation journey, $BMY has placed great emphasis on maintaining pricing strength. This led the company to maintain expectations for revenue in most markets given that payers understood the value of the therapy, and were willing to pay accordingly.

Looking to pricing data from Lauer-Taxe, we can see how OPDIVO™’s price has evolved as its label has expanded in GER.  Since launching at EUR 42,337 in early 2016, OPDIVO™ added three new indications, as well as one combination indication with YERVOY™.  Over this period of re-negotiation, the brand took a cumulative price cut of approximately 27% from its initial launch price.  Such progressive discounting is largely in line with expectations, particularly when taking into account the 13% cut during a challenging YERVOY™ combination launch.  It is worth noting that this discount could have been higher for OPDIVO™, but because $BMY owned both assets, they were likely able to offer discounts on both products, rather than take a larger hit to the jewel of their oncology portfolio. 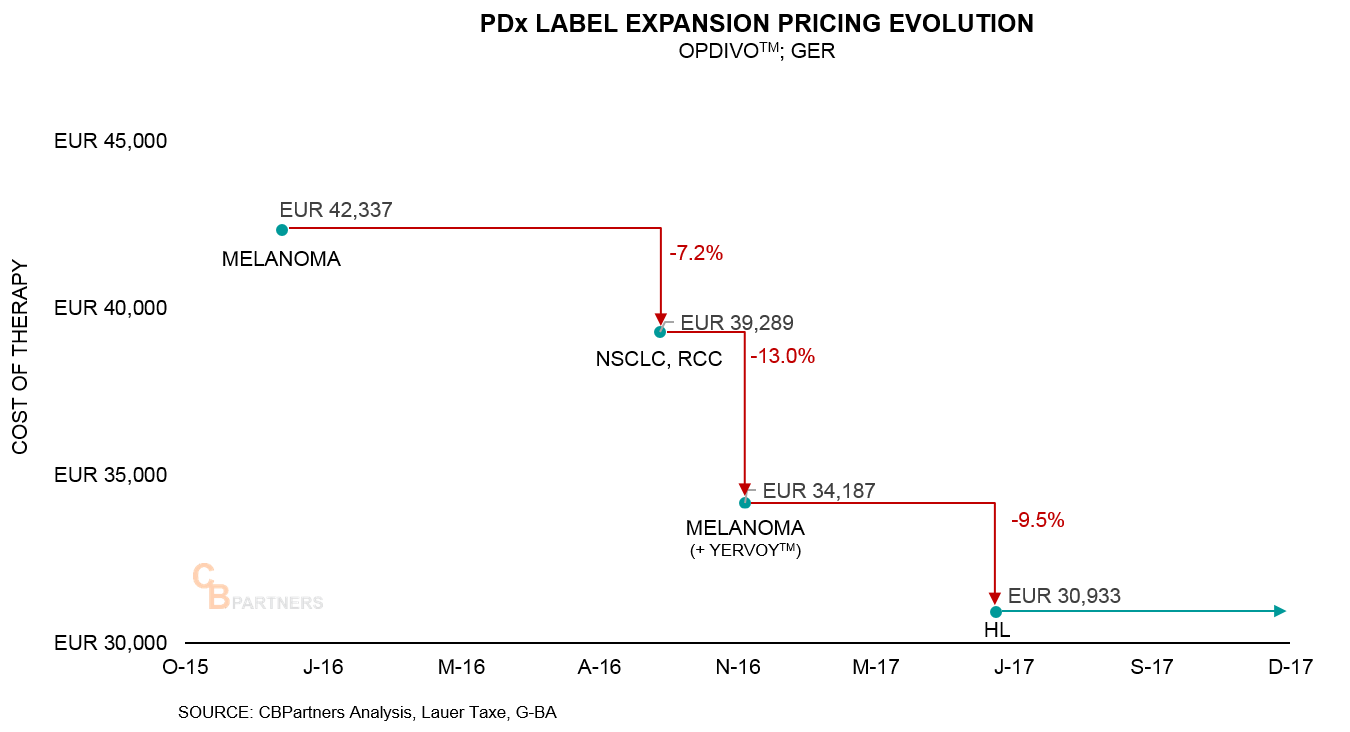 $MRK has been playing catch-up with KEYTRUDA™, and to defray the launch risk associated with being ‘another PDx’, the company adopted a more nuanced approach.  First, the company hinged their positioning on a targeted population through the use of the PD-L1 biomarker.  In May this year, $MRK gained a first-of-its-kind FDA approval when KEYTRUDA™ received authorisation for treatment of any solid tumor that expresses specific genetic markers.  While these markers are not common, this broad authorisation has substantial potential to increase KEYTRUDA™ access and commercial success.  Another interesting aspect of $MRK’s approach is the company’s willingness to discount KEYTRUDA™.  While the figures are confidential, this strategy was highlighted in GBR – one of the few markets where  KEYTRUDA™ has thus far outdone OPDIVO™ in revenues. In GBR, discounts ‘talk’, especially when the NHS / NICE are listening – and the relatively fast and positive NICE recommendation is likely driven by a ‘favourable’ confidential discount.

These pricing and access developments are not only setting the standard for the PDx space, but also for innovative products that will face a PDx price comparator.  Innovative assets that launch in these indications addressed by PDxs will be forced to demonstrate significant clinical performance if they seek to overcome the pricing anchor being established by PDxs. That could become more of a challenge as the class becomes more crowded, with payers having more comparator options to choose from for their evaluation processes.

Looking at the overall revenue figures, it is hard to argue against OPDIVO™ as the current PDx leader. Our internal analysis reveals that $BMY is beating out $MRK’s KEYTRUDA™ in all markets except GBR – largely driven by the discounting approach noted above.  Some industry observers claim $BMY is winning handily with OPDIVO™ in the USA, though the first two quarters of 2017 have included a significant narrowing of that revenue gap.  With OPDIVO™’s recent failure in first-line lung cancer, and KEYTRUDA™’s innovative, marker-based, all-solid-tumour FDA approval, $MRK may be able to ratchet KEYTRUDA™ into the pole position soon enough.

For other PDx manufacturers, however, it is a more challenging road ahead due to their late starts relative to OPDIVO™ and KEYTRUDA™.  With significant market share already locked down by the first two brands, newer entrants must compete on price to create a meaningful presence within the tumour types that include these two market leaders. However, given that at least a couple of these companies’ strategies include launching into niche populations at a high initial price, there is no commercially justifiable rationale for them to discount at launch or too extensively during label expansion re-negotiations.  Unless these companies can come to the table with truly significant and compelling evidence-based clinical differentiation within the larger PDx-populated tumour-types, the race will continue to be between OPDIVO™ and KEYTRUDA™.