Home » Thought Leadership » Infographics » What are the Most Impactful Cl…

What are the Most Impactful Clinical Considerations for Commercial PDx Success? 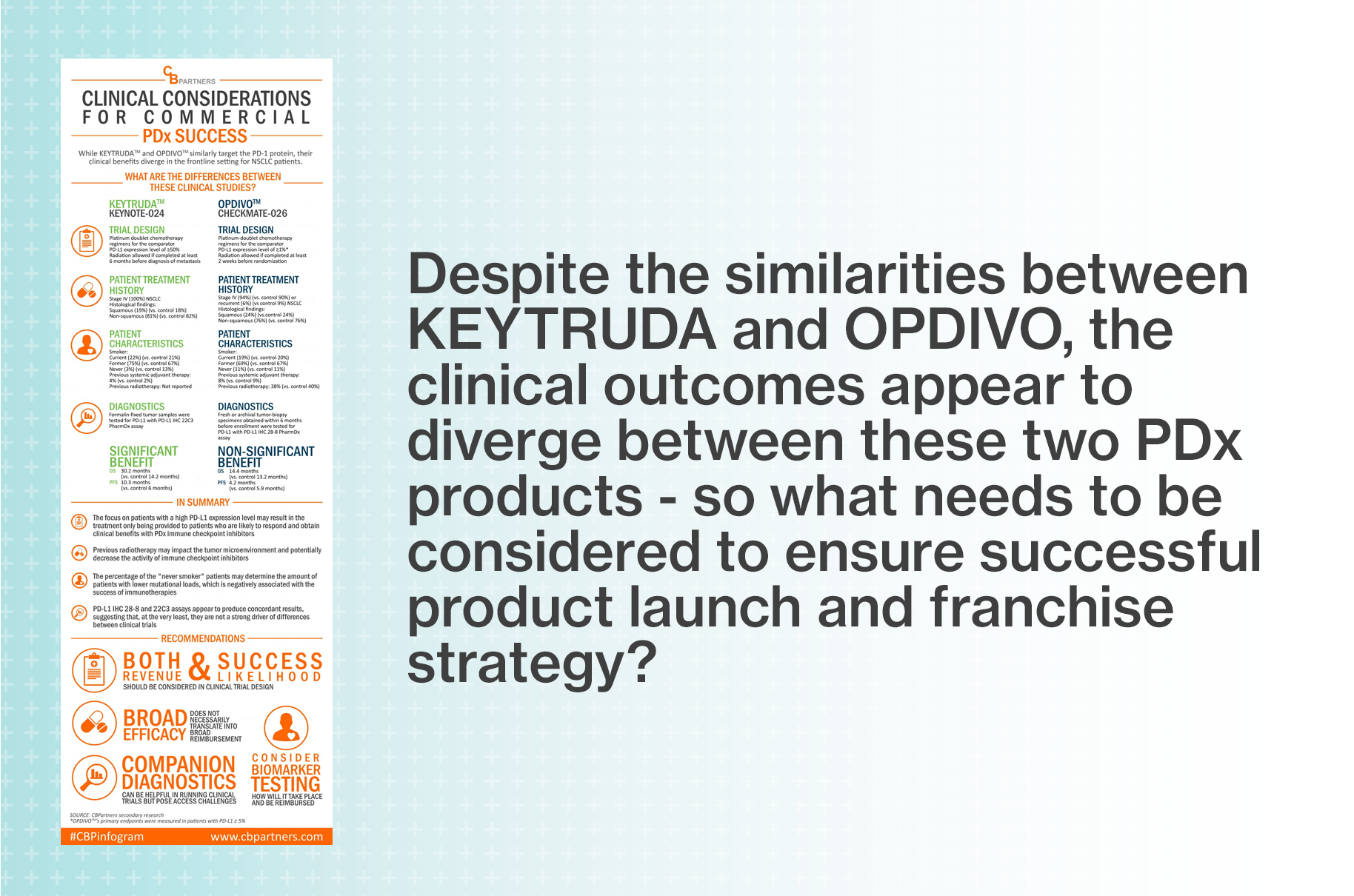 CBPartners investigates the clinical differentiation between two anti-PD-1 agents, KEYTRUDA™ and OPDIVO™, to answer one of the fundamental questions that will shape the PDx landscape: are they truly a class? If so, why are there some clinical differences across the agents?

Why are PD-1 and PD-L1 drugs classed together?

Although there are many immune checkpoint inhibitors in the market or under development, therapies targeting PD-1 and PD-L1 mechanisms can be classed together because they all target the broader PD (programmed cell death) pathway. These drugs are distinct from other checkpoint inhibitors, such as anti-CTLA4 therapies, both in terms of their mechanisms and safety profile.

The PD protein pathway has been implicated as one of the culprits behind the immunosuppressive nature of tumor environment. This facilitates the evasion of tumor cells from the host immune system, which eventually leads to tumor progression and metastasis. In the context of cancer, the overall PD pathway is primarily characterized by the interaction between PD-L1 ligand on cancer cells and PD-1 receptor on T cells. While the PD pathway may involve multiple biological processes, the exact mechanisms have yet to be fully determined. Current research suggests that the interaction between PD-L1 and PD-1 is thought to result in T cell exhaustion, anergy, apoptosis, and tolerance.

What are the differences between PD-1 and PD-L1 drugs?

From the mechanistic standpoint, PD-L1 can also interact with other receptors such as CD80, which in turn has been observed to interact with CD28 and CTLA4. Similarly, PD-1 can also engage with other ligands like PD-L2. While PD-1 is present on the surface of T cells and other immune cells, PD-L1 is generally not expressed on normal cells and found in abundance on cancer cells. PD-L1 expression has also been shown to be upregulated after T cell encounter due to the presence of IFN-gamma.

It is important to understand the PD pathway since we have yet to know whether PD-1 and PD-L1 are interchangeable in terms of their efficacy and / or safety profiles. Since PD-L1 expression is often limited to cancer cells, targeting PD-L1 may result in limited side effects. At the same time, although PD-1 is expressed on T cells and other immune cells, targeting PD-1 should still result in a relatively specific immune response due to the localized PD-L1 expression pattern. This can be contrasted with CTLA4, which regulates T cell response to antigen presented by normal human cells, such that its inhibition can easily result in T cells infiltration into normal organs. This explains the increased toxicity associated with CTLA4 inhibitors in comparison to PDx therapies.

As of now, the scientific literatures seem to indicate that antibodies targeting PD-1 and PD-L1 have similar clinical efficacy and safety in treating cancers, although such comparison can only be proved with head-to-head comparison between these therapies. Because blocking either target may shift the immunosuppressive nature of tumor microenvironment differently, ongoing studies are exploring the biological and clinical relevance of each component within the PD pathway. Future findings will help us to better understand which target and inhibitors can result in optimal immune checkpoint inhibition.

PDx agents like OPDIVO™ (nivolumab, $BMY) and KEYTRUDA™ (pembrolizumab, $MRK) have been upending the cancer treatment landscape. For several years following its approval, OPDIVO™ was been as the market leader given its rapid approval in various indications and massive sales that jumped from close to $1B in 2015 to $3.8B in 2016 in contrast with KEYTRUDA™ that only brought $0.6B in 2015 and $1.4B in 2016. Nevertheless, the approval in frontline non-small cell lung cancer (NSCLC) patients has brought a lot of attention to KEYTRUDA™ in the NSCLC space and this is followed by reports suggesting its seemingly broad efficacy across PD-L1 expression levels.

During the meeting of the American Association for Cancer Research (AACR) in April 2018, KEYTRUDA was reported to reduce the risk of death from advanced lung cancer by approximately half (HR: 0.49) in combination with chemotherapy versus chemotherapy alone. KEYTRUDA™ monotherapy was previously shown to provide overall survival (OS) benefit in patients with ≥1%, ≥20%, and ≥50% PD-L1 expression in frontline NSCLC. At the same time, the NSCLC landscape has been very competitive with OPDIVO™ having recently shown its pooled analyses of survival data that show 14% of treated patients being alive at 4 years with 19% and 11% for ≥1% and <1% PD-L1 expression levels, respectively.

How did other PDx drugs differ in trial design?

These differing approaches originated from 2016, when both OPDIVO™ and KEYTRUDA™ had been approved for lung cancer patients that failed other treatments and yet these two therapies approached the market differently. OPDIVO could be used regardless of the PD-L1 test result and became preferred by many clinicians, partially since they do not have time to prescribe the test. KEYTRUDA™ bet that a diagnostic would help with patient selection, but its approval ended up being contingent on PD-L1 status. Even more limiting, the test would end up being somewhat time consuming because doctors must order the test, wait for the processing, and then review the result before writing at essaymoment.com any prescription.

Patient baseline characteristics have also been implicated in the diverging fate between OPDIVO™ and KEYTRUDA™ in 1L NSCLC space. OPDIVO™ patient population was noted to contain a far higher percentage of never-smoker patients despite them generally having lower mutation burden, which is negatively associated with the success of immune-checkpoint inhibitors. Furthermore, a high percentage of OPDIVO™ patients underwent radiotherapy before enrollment while these patients were excluded from the KEYTRUDA™ trial. While there can be further differences in baseline characteristics (e.g., disease severity and tumor burden), it is still unclear if such variations translate to clinical trial outcomes.

Interestingly, PD-L1 inhibitors have yet to achieve much success in this disease space. BAVENCIO™ (avelumab, $MRCG) failed to improve OS in previously-treated NSCLC patients with ≥1% PD-L1 expression (vs. chemotherapy) during the JAVELIN Lung 200 trial. Since OS was significantly improved in patients with ≥50% PD-L1 expression, it appears that overly broad patient population may hinder clinical trial success. IMFINZI™ (durvalumab, $AZN) did not improve OS in 1L stage IV NSCLC patients with ≥25% PD-L1 expression when used as a monotherapy or in combination with tremelimumab (versus chemotherapy) according to the MYSTIC trial. For context, BAVENCIO™ does not have any approval in this disease area while IMFINZI™ has previously been approved for patients with unresectable stage III NSCLC whose disease has not progressed following concurrent platinum-based chemotherapy and radiation therapy. The only exception is TECENTRIQ™ (atezolizumab, $ROG), which was recently approved for 1L use in patients with metastatic NSCLC in combination with chemotherapy.

At the same time, it is not clear if patient selection was the key driver behind the divergence in clinical outcomes between KEYTRUDA™ and OPDIVO™ among frontline NSCLC patients because the PD-L1 tests are different for both products. Some researchers initially suggested it can be hard to compare PD-L1 expression level with the variation of tests used across these studies, but later studies showed that both tests are strongly correlated in assessing PD-L1 expression on lung cancer cells.

KEYNOTE-189 showed that KEYTRUDA™ in combination with chemotherapy reduced the likelihood of fatality by 51% in 1L metastatic NSCLC patients regardless of PD-L1 expression level when compared to chemotherapy alone. In KEYTRUDA™ with chemotherapy, PFS was found to be 8.8 months (vs. 4.9 months in chemotherapy alone). The benefit was higher in patients with ≥50% PD-L1 expression level with 58% reduction in the risk of fatality. KEYNOTE-042 also indicated that KEYTRUDA™ monotherapy produced OS benefit in 1L advanced or metastatic NSCLC patients with ≥1% PD-L1 expression when compared to chemotherapy. It is unclear why this outcome was not observed in the CHECKMATE-026 trial since KEYTRUDA™ and OPDIVO™ are very similar from the molecular, preclinical, and pharmacokinetic perspectives.

There are several insights that can be obtained from the PDx therapeutic space. First of all, study design can determine the success of clinical trials and product launches. Pursuing a biomarkers-defined target patient population may limit the commercial potential of a new therapy due to the narrow indication and the need for doctors to order a diagnostics test before they can prescribe the therapy. At the same time, a well-defined patient subgroup may result in larger clinical effects compared to those in a broad one. The ability to show statistically significant survival benefits in 1L NSCLC could be attributed to the focus on patients with high PD-L1 expression levels. From the market access perspective, this strategy can also increase the likelihood of market access success by allaying budget impact concerns due to a smaller, better defined patient population.

Secondly, broad efficacy does not necessarily translate to broad reimbursement because payers can be concerned about the large patient population and therefore restrict access only to patient subgroups that show the greatest response or share similar characteristics to the study population. This issue can be relevant in this space as the broad therapeutic benefit in KEYNOTE-042 appears to be driven by patients expressing high PD-1 levels, suggesting that the efficacy is not uniformly shared among these patient subgroups and access restriction based on PD-L1 can potentially be considered during HTA assessment.

Thirdly, companion diagnostics can be helpful in running clinical trials but pose challenges to access. OPDIVO™ uptake was initially stronger (vs. KEYTRUDA™) in NSCLC patients that failed prior therapies due to the absence of PD-L1 testing requirement, because ordering such test can result in further administrative burden and longer turnaround time such that physicians prefer therapies without the need for such testing. On the flip side, physicians believe in the concept of personalized medicine. Furthermore, since different PD-L1 tests are used across products, it can be challenging to ensure their consistent availability because it is often unclear which novel tests should be made available by the healthcare system, ordered by providers, and reimbursed by payers.

In summary, we believe that pharmaceutical manufacturers should consider clinical trial design holistically in terms of product launch and franchise strategies, assess the risk benefit ratio of focusing on specific patient subgroups and understand the access implications of companion diagnostics. These approaches can be helpful not only in establishing commercial success but also communicating product differentiation in the midst of crowded therapeutic areas.