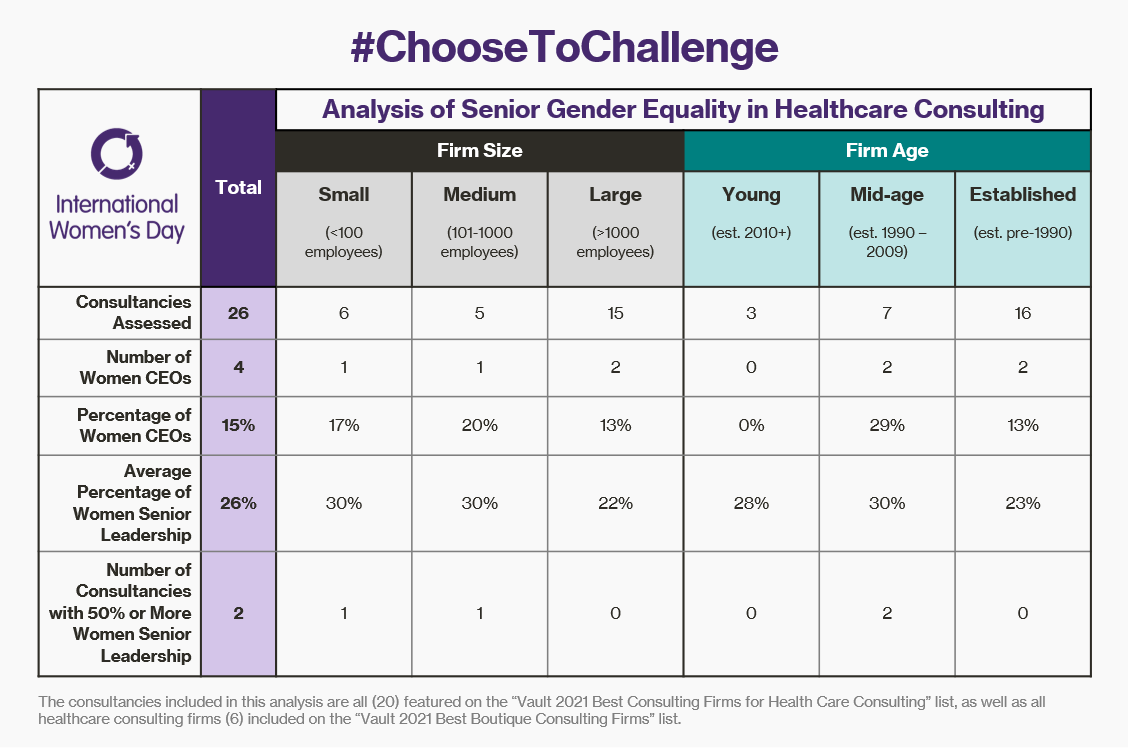 As we celebrate International Women’s Day 2021, we take time to reflect on both the achievements of women all over the world, and also the unique challenges women continue to face. Women played a critical role this past year in global progress fighting the pandemic, from driving pharmaceutical divisions responsible for vaccine development, to leading nations whose strong responses reduced deaths in the pandemic, to taking on simultaneous work-from-home and caregiver responsibilities in households across the world.

And yet, the United Nations’ quinquennial report on “The World’s Women” released in 2020 also affirms how much progress remains for women in the workforce, demonstrated by the fact that women make up only 28% of global managerial positions, approximately the same proportion as in 1995. Fewer than 1 in 13 Fortune 500 corporations features women in the Chief Executive Officer position.

This year, CBPartners supports International Women’s Day and its theme, “Choose to Challenge,” by evaluating our own industry of healthcare consulting on its progress towards gender representation and equality.

To that end, we reviewed each firm on Vault’s 2021 “Best Consulting Firms for Health Care Consulting” list, as well as all healthcare consulting firms** included on Vault’s 2021 list to ensure industry analysis across varying firm sizes. Our analysis aimed to identify which are women-led, what proportion of their website’s identified leadership are women, and how these factors may vary depending on consultancy size and age. Our internal analysis indicates that despite great effort across the industry to make consulting more inclusive, there is a need for further progress.

**Selection of firms from the “Best Boutique Consulting Firms” list is determined by website self-stated work in healthcare or life sciences. 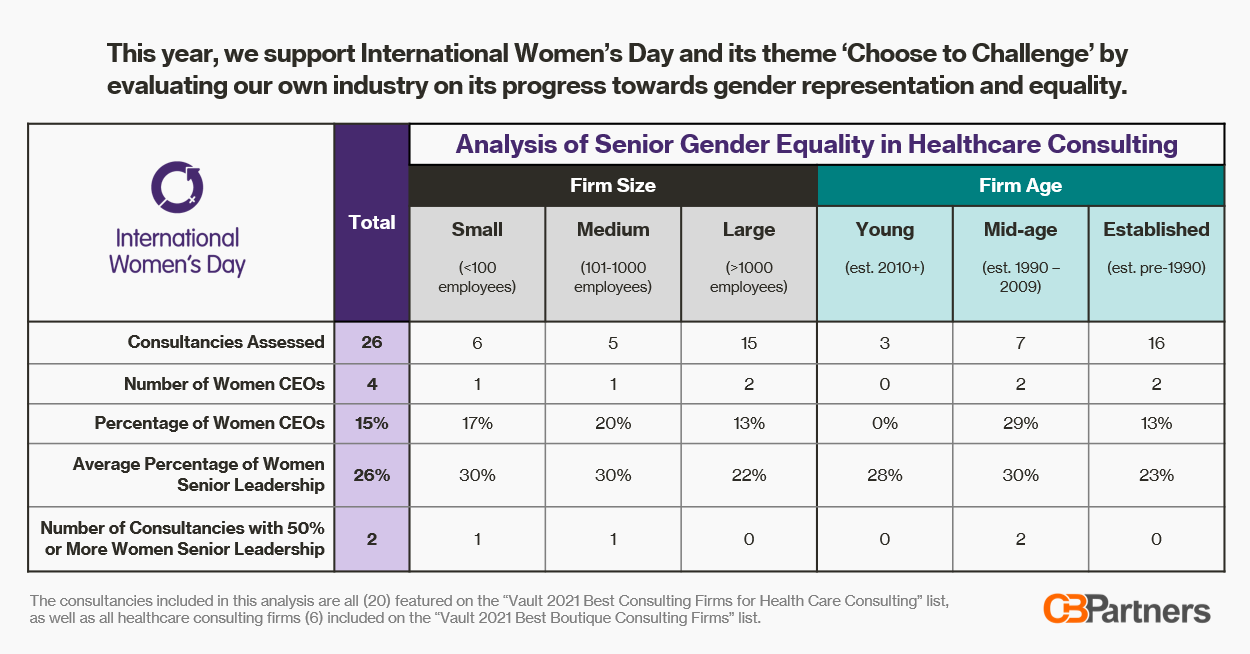 CBPartners notes this disparity not to disparage our peers, but rather to challenge the current state of our industry, ourselves included, and call attention to the need for continued dialogue and investment in opportunities for women in life science consulting.

As part of this dialogue, our Women@CBPartners initiative looks to foster these conversations internally on a regular basis, and today wants to highlight the perspectives of four women across our home offices on what being a woman in life sciences’ consulting means to them:

As cliché as it may sound, my mother truly inspires me to be a better person. She has so skilfully managed to excel in her business, balance her social commitments as a military wife, raise me while my dad was away at deputations, and carry out several large-scale relief operations across India.

While the life sciences industry and consulting practice are typically male dominated, it is heartening to see so many women now enter these industries in positions of leadership. As a woman in healthcare consulting, I’m continually seeking out women mentors and role models who have paved the way for the next generation to excel in these fields.

Women@CBP is a great example of an initiative that has helped foster discussions amongst not just women but everyone at the firm. I have truly enjoyed the events and informative talks by guest speakers. These have not just made me aware of the subtle ways that gender inequality shows up in any workplace but have made me think of how to actively take steps to make a change.

What advice would you give to a woman interested in pursuing a career in specifically?

I would say don’t be afraid to make yourself a priority. I’ve often noticed that as women, we tend to stretch ourselves more than our male counterparts, taking on additional responsibility both at work and the home front. It is important to take time out for your physical and mental wellbeing, and to remind yourself that it’s okay to ask for help. Seek out women mentors and role models who will guide you forward in your career.

Kamala Harris for her unapologetic success despite systemic gender and racial barriers and Whitney Wolfe Herd for breaking the norm for tech startup CEOs, persevering despite workplace harassment, and leading Bumble to an IPO.

Life science is sometimes considered a ‘behind-the-times’ industry, in which we occasionally encounter stakeholders or dynamics that are subconsciously influenced by gender. What’s worrying is that such internal assumptions are not always apparent at first glance, requiring consultants to have a strong understanding of the perspectives of others, to determine when and how such biases may be in play, and demonstrate their capabilities regardless.

I think CBP has actually done quite a lot for my personal approach to consulting and what it means to be a woman in consulting, in that it has created an environment (and led by example) where gender should not and does not negatively impact opportunities or assessments.

Ah – difficult question! I think there are many inspirational women and it is difficult to pinpoint just one woman than inspires me. I draw inspiration from women and men alike and rather than having one role model, I take learnings from different people based on principles that are important to me. If I had to give an example, one of the first woman I recall finding inspirational and having an impact on me as a young girl was Hellen Keller. I had to read her biography at school as part of an assignment and was deeply inspired by her defiance of expectations and self-determination.

I think for anyone in consulting long-term, being in consulting means discipline, hard work, finding efficiencies and establishing work-life balance – whatever that means to you. It is easier said than done in practice, and I am constantly working on developing better habits that help me re-charge mentally / physically while still being able to give my best at work.

CBP has taken many steps to promote gender equality and believe the foundation is a merit-based culture where people’s work is recognized regardless of gender / title and where leadership takes proactive steps at fostering diversity across all seniority levels of our organizational chart. Employee-run initiatives, such as Women@CBP, which are supported by leadership have also created a platform to raise awareness around gender equality through formal events (e.g., speakers, conferences, documentary watching) and informal events (e.g., happy hours, Q&A panels with women across different levels) that have brought togetherness among the female community at CBP.

I think in any field the principles of success are similar – be confident, be disciplined, and work hard.

My grandmother. She was a strong-willed woman that grew up in a different time and gave up her dreams of a career (e.g., one of the first women to work with chimpanzees preparing to go to space / accepted into medical school) to raise a family. When it came to her grandchildren, she wanted us to do more. She challenged me in everything I did and yet was one of my biggest cheerleaders.

We are continuing to evolve as an industry, but at times it can mean walking into a room to deliver a key recommendation and being the only woman in the room. Being surrounded by those that are like you, is always comforting, but being a woman in consulting often means getting used to the discomfort of being the only one. As a woman in leadership in consulting, I want to make sure those entering the workforce know that there is a long-term career opportunity for them in this industry and hopefully seeing another female in that role can paint the picture of what that could look like for them.

CBP has sought to have a continuous and open dialogue on issues of gender inequity (and many others), which has resulted in heightened awareness and allowed our internal practices, benefit offerings, ways of interaction, etc. to be thoughtfully implemented. We are proud of the number of women we have at the firm and the ability to hopefully train many of them to be future leaders in the life sciences industry.

Find an environment that works for you – where the cultural values align with what you believe in and the work is intellectually stimulating. Once you find that, then set priorities between work and home life and ensure both are realistic and achievable, while looking at the job as a long-term career vs. focusing on the next promotion. Lastly, find someone or multiple people within the company that you connect with and can have honest conversations – this will provide for a good platform for feedback, ensure any frustration has an outlet, and provide long-standing camaraderie. If you put all of these things in place, then your career in consulting will be a long and fruitful one – and my advice is definitely to pursue a career in consulting!

Our colleagues encourage those interested in a career in healthcare consulting to seek out an environment in which they are able to prioritize their aspirations, needs, relationships, and abilities, in order to cultivate a fulfilling and sustainable career. CBPartners looks forward to continuing to “choose to challenge” our industry and our own practices, in order to foster an environment where success is equally accessible to all.

CBPartners celebrates diversity and is committed to creating a fair and welcoming environment for all employees to reach their full potential at the firm. The Women@CBP initiative was established to ensure that the entire firm remains actively aware of challenges faced by women in this industry so that we can take measures to counteract push and pull factors before they affect our talent pool.