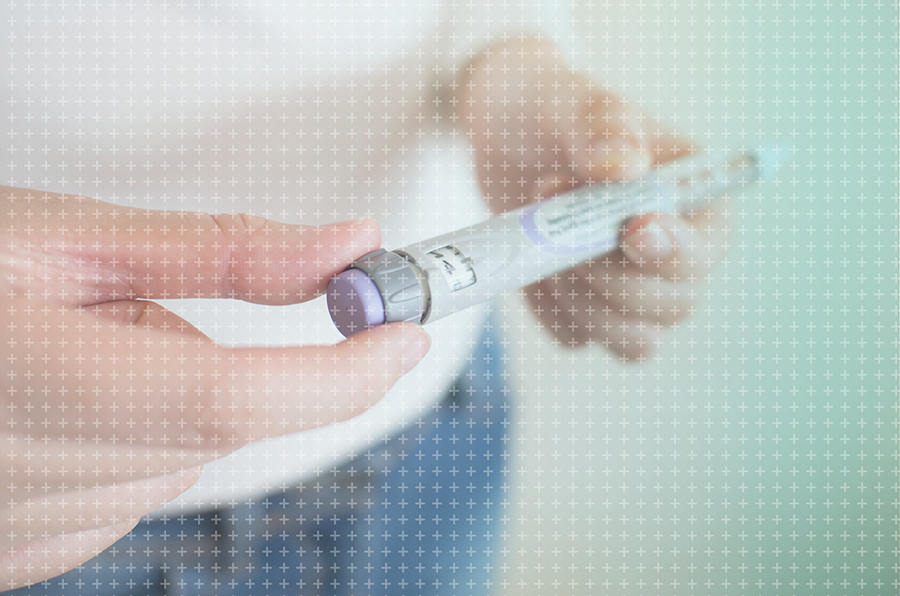 CBPartners’ Take: All types of insulin products included in this analysis had significantly higher list prices in the USA vs. DEU, GBR, and FRA despite the availability of often equivalent products, brands, and technologies. While the only biosimilar insulin to be approved by the FDA through the new pathway had the lowest price nationally, the even lower price of Walmart’s private label insulin analog demonstrates biosimilars may not be the only competitor putting downward pressure on insulin prices in the USA.

As of 2018, approximately 10% of Americans were living with diabetes and 33% of them required insulin to manage the disease. Despite this high prevalence, a Yale Diabetes Center study in 2019 found that 25% of surveyed diabetes patients in America reported cost-related insulin underuse, which ranged from using less insulin than prescribed or not filling the prescription due to cost. Similarly, a 2020 International Diabetes Federation survey found that 0% of UK diabetic respondents demonstrated insulin underuse while 25% of US respondents did. The growing price of insulin is evidenced in average list prices which tripled in the 2010s and patient out-of-pocket costs which doubled in the same time in the United States.

The problem of insulin unaffordability seems to disproportionately affect Americans compared to citizens of other countries. In a 2018 analysis by the RAND Corporation, the average list price of insulin in the USA was thirteen times as expensive as insulin in the UK, at USD 98.70 a unit vs. USD 7.52 a unit. In the same year Americans were approximately a third of insulin consumers and accounted for 84% of insulin sales. Several factors influence the discrepancy in insulin price in the USA vs. abroad.

The Development of Insulin

Unlike some high cost drugs, insulin is not a new therapy. Insulin was discovered and purified in 1921, and first used to treat diabetes patients in 1922. Due to its life saving potential, the inventor team Frederick Banting, James Collip, and Charles Best sold the insulin patent to the University of Toronto for USD 1. However, the insulin of today differs from the original. Analog insulins, which first entered the market in 1996, are laboratory-grown and can be genetically modified to act faster or more uniformly for improved blood sugar management. While human insulin is still available, analog insulin is the most common type used today.

Despite decades on the market, insulin faces limited competition in the United States, partly due to the lack of generic competitors. A 2019 FDA report found that the first-to-market generic small molecule drugs typically had an average manufacturer price that was 39% lower than the branded small molecule drug, which dropped to 54% lower upon the entry of a second generic. However, insulin in the United States does not follow typical generic dynamics which drive competition and thus lower prices.

Insulin does not have generic competitors because it is not a small molecule drug, but instead a hormone. Insulin is classified as a biologic, which is defined by the EMA as a medicine whose active substance is made by a living organism. While small molecules’ active substance can be replicated exactly by generics, biologics are biologically unique. Instead of generics, biosimilars drive competition against biologics. Biosimilars are highly similar, but not identical, to biologics, which already have an approved structure, biological activity, efficacy, safety, and immunogenicity profile. Biosimilars must prove equivalent efficacy and safety to the originator in order to gain market approval.

The additional complexity of biosimilars compared to generics results in a longer and more costly development process. As of 2013, bringing a generic small molecule drug to market cost USD 1-4 million and bringing a biosimilar to market cost USD 100-250 million, leading to slower entrance of biosimilars compared to generic small molecule drugs. The pathway for biosimilar authorization also differs across markets, making access an addition variable.

Biosimilars, including insulin, must undergo comprehensive comparability studies with the reference medicine to gain EMA approval. Once they have proven comparability to the original large molecule in both non-clinical and then clinical settings, biosimilars use the originator’s package of pharmaceutical quality, safety, and efficacy studies as part of their evidence foundation. Regardless of approval pathway, all EU medicines must pass the same quality standards, proving chemical purity, biological activity, strength, and formulation among other features.

Post-BREXIT as of JAN 2021, GBR’s Medicines and Healthcare Products Regulatory Agency (MHPRA) reduced the clinical trial data requirements for biosimilar submissions compared to the EMA. The MHPRA eliminated the requirement for comparative efficacy trials for many therapies when sufficient comparative analytical and functional data exists, making the biosimilar approval pathway even more achievable in the UK compared to the EU.

Prior to 2020, despite being considered a “biological product,” insulin was regulated as a chemical drug in the USA, which required each follow-on insulin to seek approval under an abbreviated new drug pathway. The classification of chemical drug provided insulin with neither a generic nor biosimilar pathway approval and under the previous pathway, only two biosimilar insulins (LLY’s insulin glargine BASAGLAR in 2015 and SNY’s insulin lispro ADMELOG in 2017) were approved in the USA. The new guidance opening the biosimilar regulatory pathway to add-on insulins is meant to streamline and expedite the process, theoretically promoting the quicker and more frequent entrance of biosimilar insulin products. In 2021 VTRS’ SEMGLEE (insulin glargine-yfgn) became the first insulin biosimilar to be approved under the biosimilar pathway.

This analysis explores the prices of 18 insulins, four in the USA, four in DEU, five in GBR, and five in FRA to compare the cost of biologic vs. biosimilar insulin within and between the countries. To make the comparisons as accurate as possible, only pen-injectable insulin with 100 units of insulin / mL and three mL per pen were priced (300 insulin units / pen), and for applicable products 33 iu / microgram.

An additional nuance was the categories of insulin: very rapid acting, long acting, and combination long acting / GLP-1 agonists. Depending on the individual needs for diabetic patients, they may be limited to selecting only from a specific category. The most expensive category of insulin was the combination long-acting insulin glargine / GLP-1 agonist, which currently is only available as branded biologic SOLIQUA. However, with DEU’s SOLIQUA priced at only USD 16 compared to the USA list price of USD 144, DEU’s most expensive insulin, within the analysis criteria, was nine times less expensive than the same insulin in the USA. Pricing for SOLIQUA was not available in FRA, which contributed to its comparatively low prices and narrower difference between biosimilars and biologics. 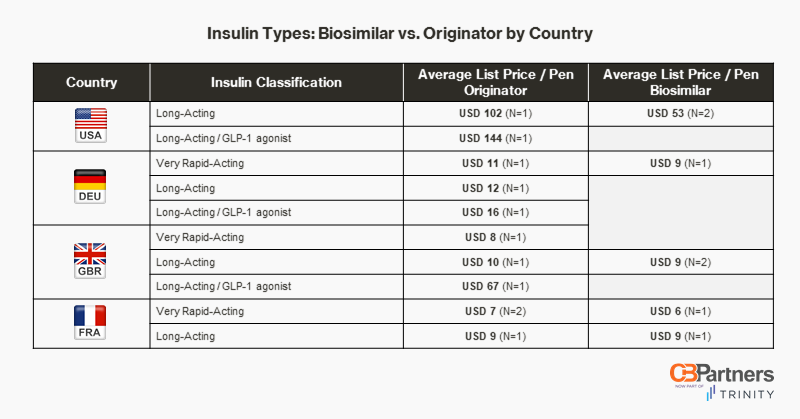 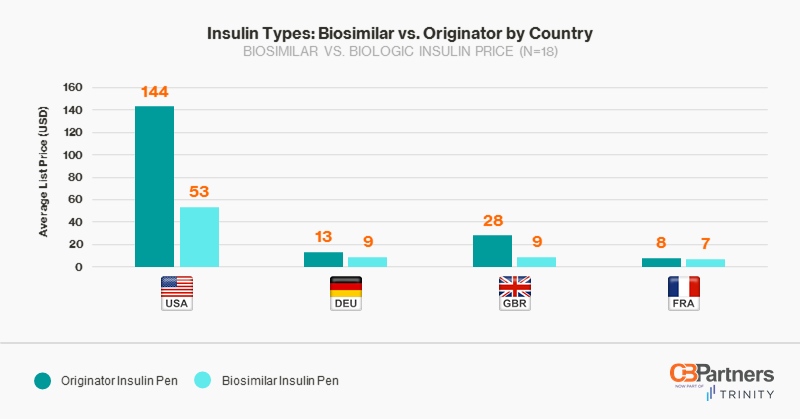 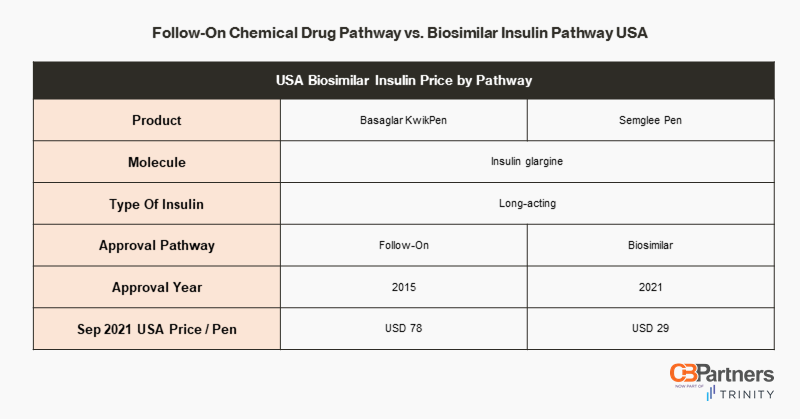 Separate from the new FDA approval pathway, Walmart and Novo Nordisk recently partnered to launch a private brand analog insulin, which became available in Walmart and Sam’s Club pharmacies in July 2021. As of JUN 2021, the private label NovoLog fast-acting analog insulin (insulin aspart) had a list price of USD 17 per pen, notably over 1.5 times less expensive than the lowest priced biosimilar insulin in the USA included in the prior analysis. While it should be noted that this is an apples to oranges comparison since the NovoLog is a fast-acting insulin, with a 10mL pen compared to the 3mL, long-acting pens shown for the USA, this development suggests biosimilar entry may not be the only mechanism lowering insulin prices in the USA.