Question: What do hedge funds, Hepatitis C, and headaches all have in common?

Answer: All three have played an important role in the short, but intriguing history of the Boston-based non-profit Institute for Clinical and Economic Review (ICER).

ICER considers itself an “independent watchdog on drug pricing” in the US. The organization has captured public attention for several of its drug evaluations. These evaluations have been for products in disease spaces such as high cholesterol, cystic fibrosis, oncology, and rare diseases.

It is interesting to consider how ICER’s evaluations may frame manufacturer decision-making, as pharmaceutical manufacturers can tout an ICER endorsement as a proof of their position. But before diving into the relationship between ICER and pharma, it may first be helpful to understand how ICER has evolved since its founding in 2006. 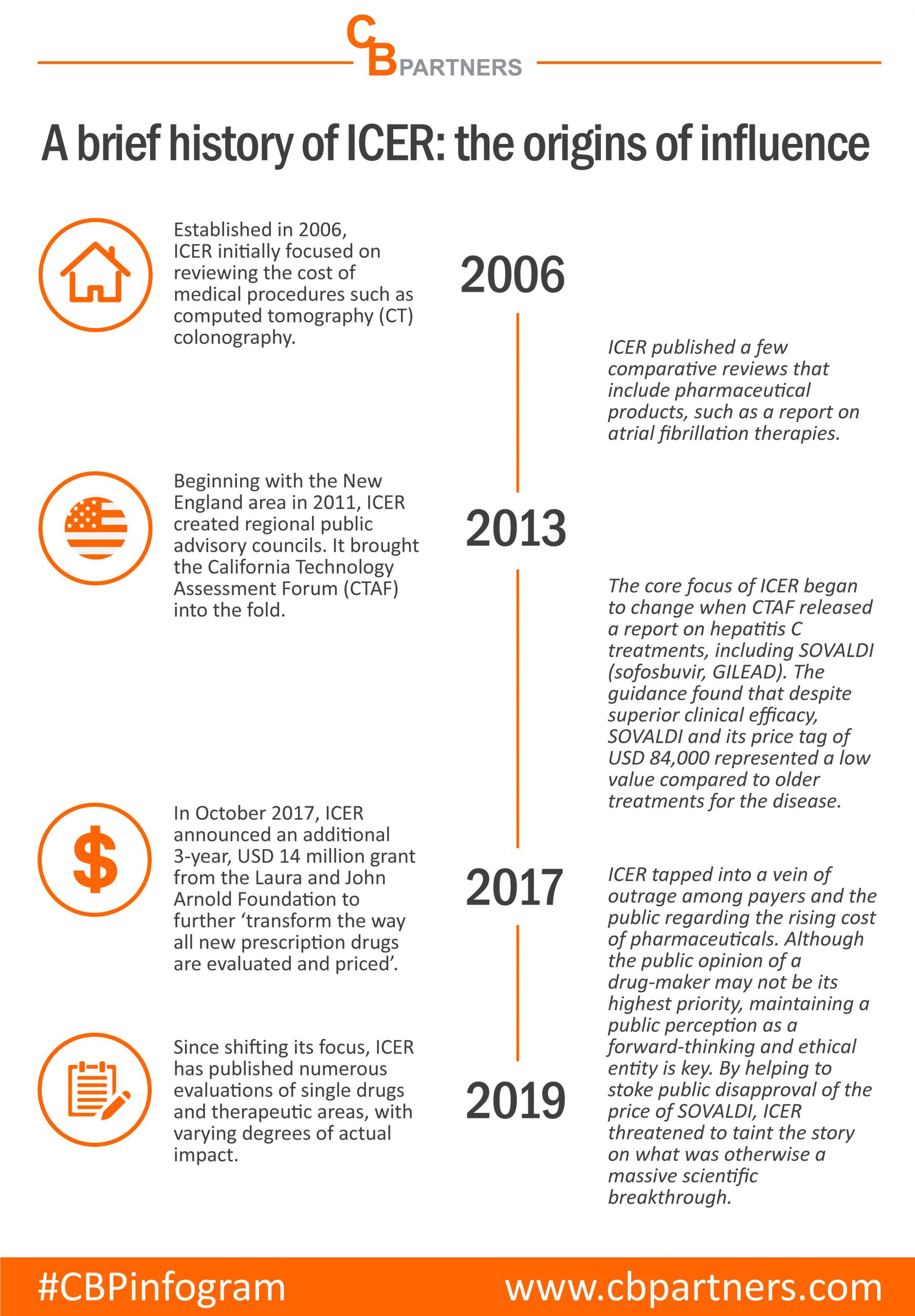 In terms of its impact on pharmaceutical manufacturers, ICER has created both opportunities and challenges. Four key case studies highlight the varying strategies manufacturers have pursued in engaging with ICER in the past.

REPATHA™️ (evolocumab, $AMG) and PRALUENT™️ (alirocumab, $SNY and $REGN) are PCSK9-inhibitors indicated to treat high cholesterol and cardiovascular disease. ICER’s initial review in 2015 concluded that both PCSK9-inhibitors were not cost-effective, setting the precedent for a negative public opinion that facilitated the enforcement of heavy payer coverage restrictions of both products. In May 2018, data from the 18,924 patient ODYSSEY OUTCOMES trial allowed PRALUENT™ to score a victory against competitor REPATHA™. PRALUENT™ reduced the risk of major adverse cardiovascular events in high-risk patients and was associated with a lower all-cause mortality rate.

Despite the win on clinical benefit, $SNY and $REGN wanted to convince payers of additional cost savings associated with PRALUENT™️ use. On the same day that the ODYSSEY OUTCOMES clinical trial results were announced, the pharmaceutical manufacturers also announced a further reduction in PRALUENT™️’s net price to align with the range recommended by ICER. $SNY and $REGN had provided ICER with early access to the ODYSSEY OUTCOMES results, which allowed ICER to issue a revised value assessment report for PRALUENT™️ that included the clinical trial data.

$SNY and $REGN also engaged with ICER in their review of DUPIXENT™ for moderate-to-severe atopic dermatitis. As stated in the public final evidence report, the manufacturers informed ICER that “the average net price in the US market will be no more than $31,000.” Therefore, ICER’s base case cost-effectiveness analysis utilized DUPIXENT™’s net price instead of the WAC (Wholesale Acquisition Cost) of USD 37,000. ICER found that DUPIXENT™ provided a reasonable benefit at this price point.

In April 2019, ICER published a report stating that ZOLGENSMA™, a single-dose gene therapy for the treatment of spinal muscular atrophy (SMA), would be cost-effective at USD 899,000 (at a threshold of USD 150,000/QALY) or USD 1,500,000 (at a threshold of USD 150,000/life year gained). The next month, $NVS CEO Vas Narasimhan was quoted saying that ZOLGENSMA™ would be cost-effective at up to USD 5.4 million but would be priced “far lower” than this range.

Upon FDA approval in May 2019, $NVS announced ZOLGENSMA™’s price at USD 2.1 million and ICER responded with an addendum to their initial report, now citing cost-effectiveness ranges of USD 1.1 million to 1.9 million (prices to reach $100,000 to $150,000 per QALY gained threshold) and USD 1.2 to USD 2.1 million (prices to reach $100,000 to $150,000 per life year gained threshold) based on additional early data from the SPRINT Phase III trial. As of publication, $NVS is yet to adjust its price to more closely reflect ICER’s recommendation, but ZOLGENSMA™ is priced in alignment with the less frequently cited per life year gained (LYG) threshold.

In 2018, ICER published a report concluding that $VRTX’s cystic fibrosis trio KALYDECO™, ORKAMBI™ and SYMDEKO™ would require discounts of up to 77% in order to be cost-effective. $VRTX disapproved of the findings and publicly argued that ICER’s methodology was flawed in a strongly worded letter, stating that their findings could negatively impact the broad patient access to its CF drugs in the US. ICER has not revised their report, and all three treatments continue to be a commercial success for $VRTX. 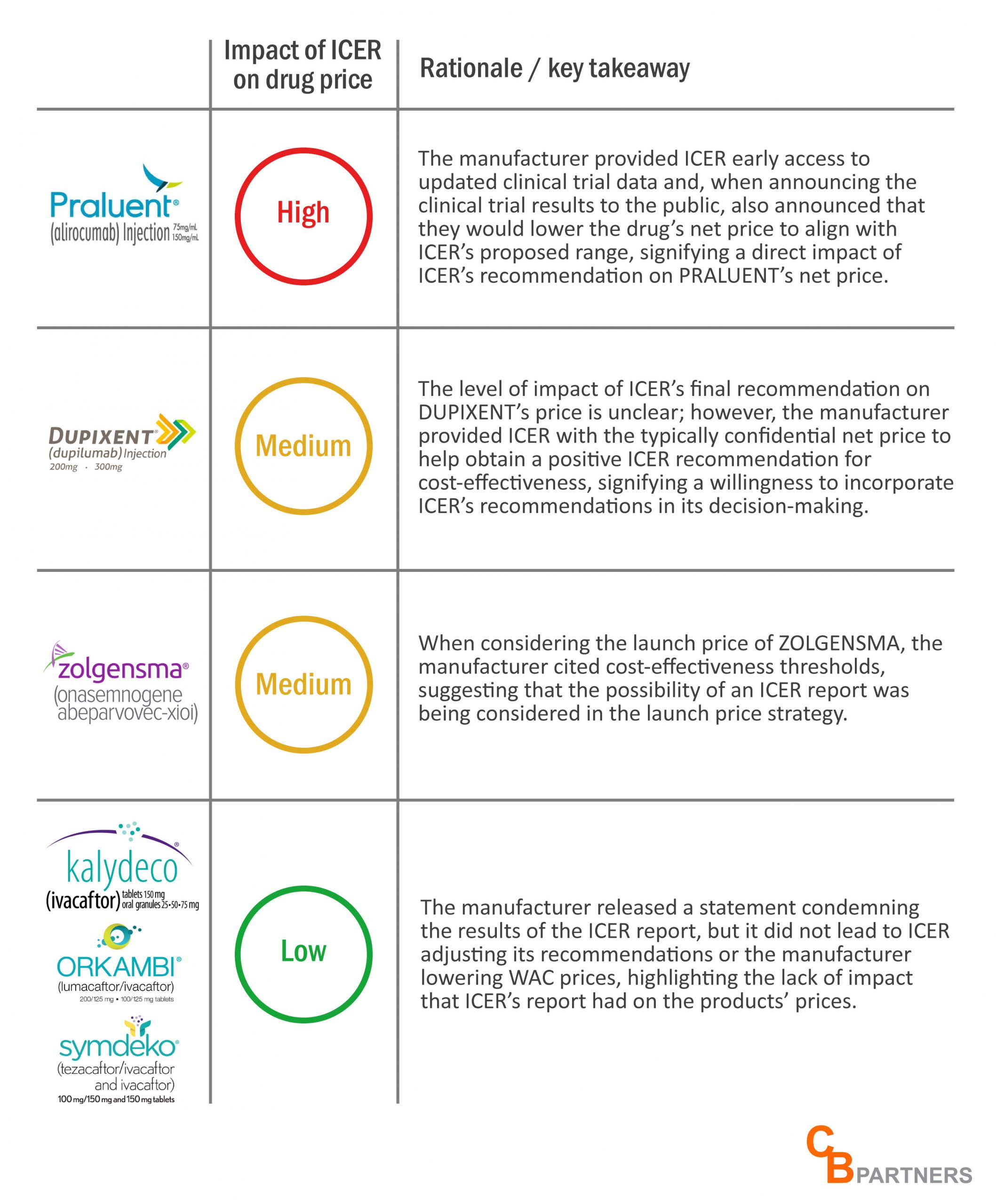 Will ICER become more influential in the future?

Compared to the comprehensive health technology assessment (HTA) organizations in place across many European markets, ICER’s cost-effectiveness evaluation is selective and seems to focus on therapies that are new, innovative, high-cost and / or in competitive disease spaces. As a result, while the organization has gained influence, it is limited in its impact. For now, ICER’s reports serve primarily as drivers of public scrutiny of drug pricing and / or sources of evidence leveraged by manufacturers to publicly support a certain price. The real measure of ICER’s impact will be if its reports are able to influence US payer decision-making on a broader scale.

Firms may follow $SNY, $REGN, and $NVT’s lead by providing ICER with net prices and / or ensuring updated clinical data is used in their assessments. This will likely only occur when manufacturers have a positive story to tell and are able to agree with ICER on pricing, but the credible threat of a negative recommendation may also inspire more manufacturers to proactively make their own statements about their product’s cost-effectiveness as PR insurance. In either case, the possibility of an ICER review may move some manufacturers to ensure their clinical trials include endpoints that can easily be used in cost-effectiveness analyses.

At a high level, the current political climate of drug pricing scrutiny is a significant driving factor of ICER’s influence. Unless ICER establishes a formal pathway to influencing payer outcomes, its influence is unlikely to outlast however long drug pricing dominates the political cycle.