Home » Thought Leadership » Blogs » How Do Companies Spend the Rev…

How Do Companies Spend the Revenue Generated from Blockbuster Drugs? A Closer Look at Vertex and Gilead 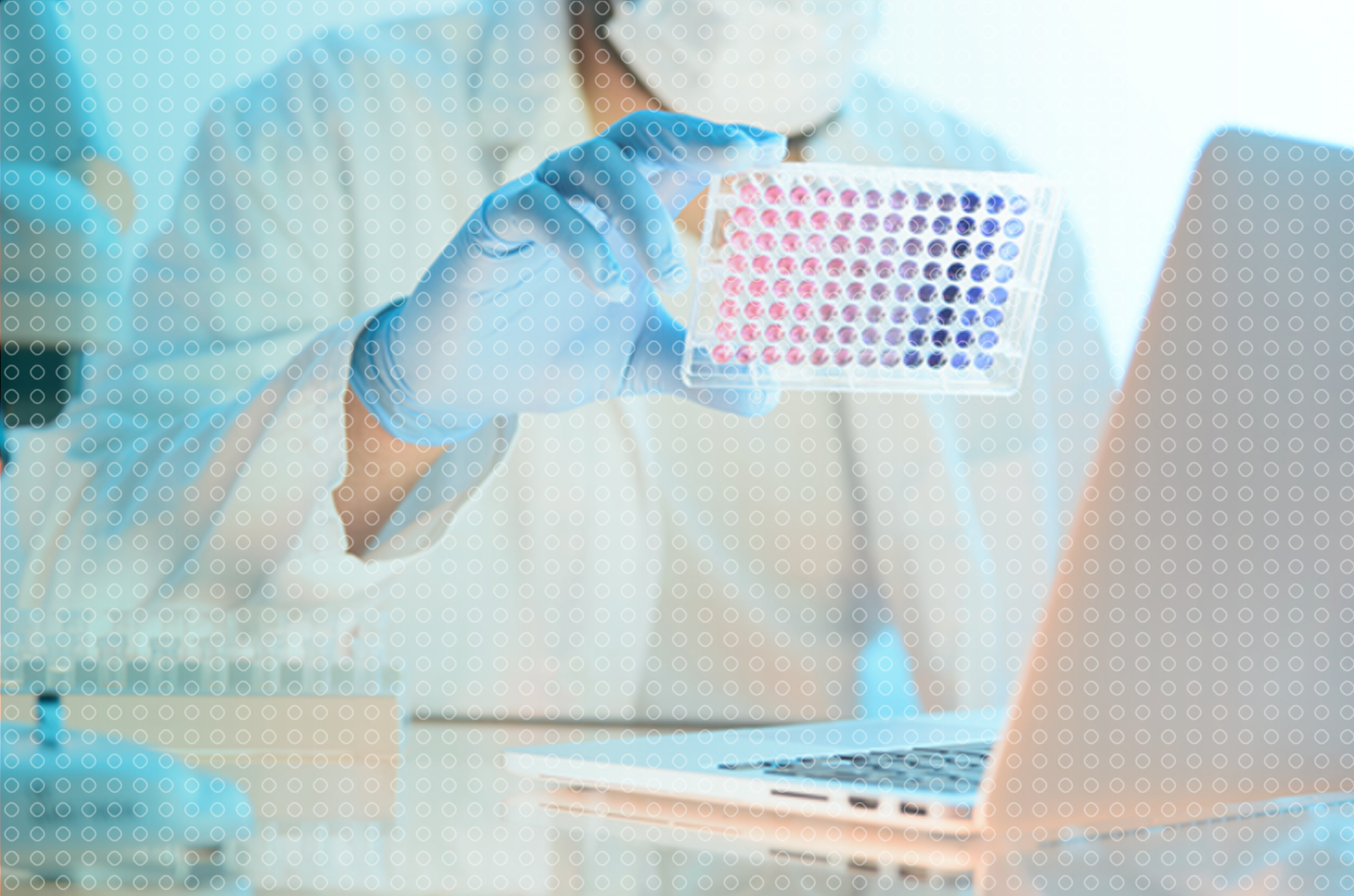 CBPartners’ Take: As the industry continues to evolve and innovate, manufacturers looking to develop the next blockbuster therapy should consider investing in cutting-edge technologies in disease spaces with high unmet clinical needs to position themselves for long-term success

The Role of Innovation in Recent Blockbuster Drugs

In 1977, before merging with Glaxo to become GSK, Smith, Kline and French developed the first medication for stomach ulcers. Prior to release of TAGAMET (cimetidine), ulcer patients frequently required invasive abdominal surgery. Nine years later in 1986, TAGAMET became the first drug to hit USD 1B in sales, and it quickly became a goal of biotech and pharmaceutical companies to develop the next blockbuster drug.

Blockbuster drugs generate frequent press coverage for their steep prices and profit for manufacturers. Given the significant revenue generation that is associated with a single blockbuster drug, there is an incentive to move forward and plan for the next innovative and profitable breakthrough. Innovation is a key component in reaching this goal, as indicated by the expected USD 204B pharmaceutical industry R&D spending by 2024. Manufacturers continue to invest more into R&D than before, with a healthy portion of the growth going into developing next-generation treatments like cell and gene therapies.

Our team wanted to explore and showcase two examples in which manufacturers of blockbuster drugs invested their substantial earnings into next generation therapies; Gilead, with SOVALDI (sofosbuvir) and HARVONI (ledipasvir / sofosbuvir); and Vertex, with ORKAMBI (lumacaftor / ivacaftor) and TRIKAFTA (elexacaftor / tezacaftor / ivacaftor and ivacaftor).

Following the financial success of recent Gilead and Vertex therapies, the companies are investing their blockbuster revenue in new disease spaces and cutting-edge technologies. In an age where biotechnology and medicine are constantly evolving, it is important to fully understand what the leaders in the pharmaceutical industry are contributing, both scientifically and financially.

Gilead continued its investment in oncology with a USD 3B collaboration with Sangamo Therapeutics in 2018 to develop zinc finger nuclease technology (ZFN), a pioneering gene editing approach for an off-the-shelf solution for cancer therapies. If successful, this technology could be more efficient than the current CAR-T therapies, which require a 20-day cell engineering wait time. Finally, in May 2020, Gilead established a 10-year, USD2B partnership with Arcus Biosciences, gaining access to Arcus’s  unique platform that develops intra-portfolio combinations of small-molecule and antibody cancer immunotherapy product candidates. From Kite Pharma to Sangamo and Arcus, Gilead has adjusted its oncology space investments from a large-scale acquisition to earlier stage innovations of diversified portfolios.

Gilead’s partial shift of focus from antiviral to oncology was no surprise. Indeed, portfolio diversification is crucial for ensuring Gilead’s future growth, as Gilead’s HCV blockbusters faced fierce competition soon after they were launched. For example, AbbVie entered the space with VIEKIRA PAK (ombitasvir / paritaprevir / ritonavir) (approved only two months after Gilead’s Harvoni) and later MAVYRET (glecaprevir / pibrentasvir). Merck’s ZEPATIER (elbasvir / grazoprevir) (approved in January 2016) also gained a considerable share in the market. These new entrants into the HCV market caused the prices of Gilead’s HCV therapies to nosedive. Furthermore, in January 2019, Gilead made an unusual move to launch the generics of two of its HCV drugs, EPCLUSA (sofosbuvir / velpatasvir) and HARVONI, to increase access to the treatments. As a result of the decreased average net selling prices, Gilead’s HCV product sales revenue declined from USD 9B in 2017 to USD 3B in 2019. The investments in both the late-stage CAR-T assets and early-stage oncology product development could potentially help Gilead offset the antiviral drug revenue decline and stabilize its earnings, now and into the near future. 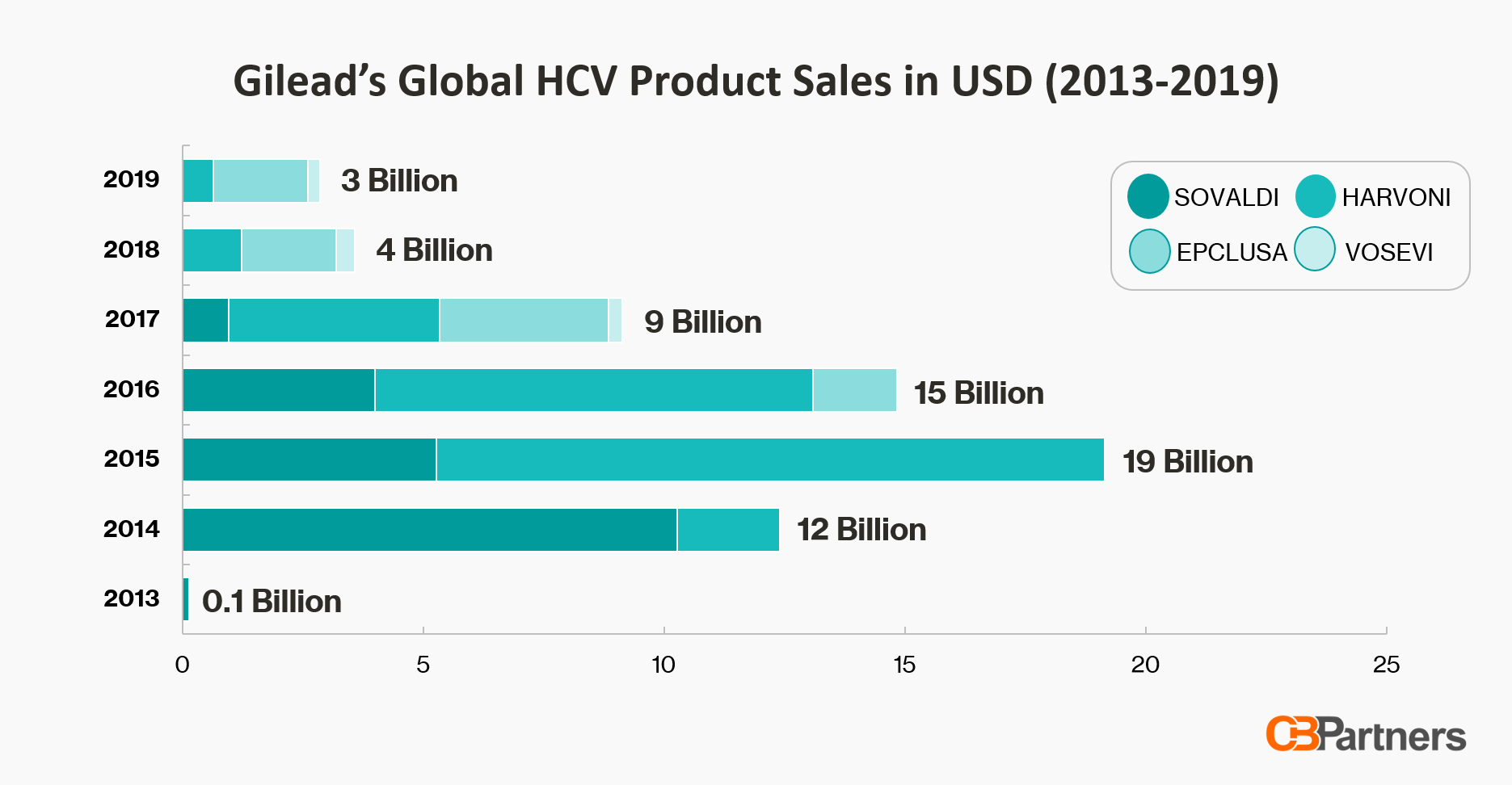 Vertex was founded in the 1989 in the hopes of developing the next generation of high-tech, transformative therapies. After a string of misses and short-lived successes in hepatitis C, Vertex finally became profitable in 2016 with a string of cystic fibrosis (CF) therapies: TRIKAFTA, SYMDEKO (tezacaftor / ivacaftor and ivacaftor), ORKAMBI, and KALYDECO (ivacaftor). These drugs are the first and only treatments that extend life expectancy beyond early adulthood for CF patients with the F508del mutation that inhibits functioning of the cystic fibrosis transmembrane conductance regulator (CFTR) protein. Vertex stock prices increased by more than fivefold with the approval of TRIKAFTA, whose sales have brought in over USD 5B in revenue in its first year of authorization.

Following the success of its CFTR protein modulators, Vertex is expanding its research and development efforts into cell and gene therapies for CF and additional genetic diseases. Over the past five years, the company has been building its small molecule and gene editing capabilities through collaborations and acquisitions of genomic-focused biotech firms. In June 2019, Vertex announced that their team would be entering the Duchenne muscular dystrophy (DMD) space through contracts with Exonics Therapeutics and CRISPR Therapeutics.

Vertex acquired Exonics, whose research focuses on targeted gene therapy development for neuromuscular diseases, particularly DMD, for USD 995M. The small biotech startup was founded in 2017 with funding from Cure Duchenne, a patient advocacy organization dedicated to finding a treatment for DMD. With a global prevalence of between only 1 and 8 cases per 100,000 people, DMD is a traditionally unprofitable market for pharmaceutical and biotech companies to enter. President and co-founder of Cure Duchenne, Debra Miller said the non-profit committed funds to Exonics because “none of the other organizations were interested, so we ended up funding it by ourselves.”

Exonics’ story is familiar for Vertex; the firm’s breakthrough cystic fibrosis therapies had a similar start. Like DMD, the CF patient population was considered too small to attract interest from pharmaceutical manufacturers. Consequently, in 2000, the Cystic Fibrosis Foundation invested USD 47M over 5 years into CF research at Aurora Biosciences. One year later, Vertex acquired Aurora and went on to develop SYMDEKO, ORKAMBI, KALYDECO, and TRIKAFTA. Now, determined to make a lasting impression in the industry, Vertex hopes to repeat its CF success in DMD using cell and gene therapies.

Specifically, Vertex researchers are exploring SingleCut CRISPR technology to target mutations that cause Duchenne through an expanded collaboration with CRISPR therapeutics. The gene editing company was founded by Dr. Emmanuelle Charpentier, who played a key role in the invention of CRISPR / Cas9 gene editing technology. Under the collaboration, Vertex and CRISPR Therapeutics entered into an exclusive licensing agreement to “discover and develop gene editing therapies for the treatment of DMD.” Under the agreement, Vertex paid USD 175M up front with continued payments of up to USD 1B for exclusive worldwide rights to CRISPR Therapeutics’ existing and future intellectual property.

With the combined expertise of CRISPR and Exonics, as well as Vertex’s strong track record with cystic fibrosis, the company is confident in their ability to navigate new disease spaces. Vertex is well-positioned to develop the first successful treatment for DMD, but also risks a pricing crisis if they are unable to recoup the USD 2B pipeline investment.

Industry Implications: What Manufacturers Can Learn from Gilead and Vertex

From studying the examples of Gilead and Vertex, it may seem that investing large sums of money to produce a blockbuster drug is the key to success. However, it is important to look beyond the initial influx of money both Gilead and Vertex saw from their respective blockbusters. By reinvesting their blockbuster revenues, both companies were able to diversify their portfolio to prevent being “one-hit-wonder” biotechnology companies. Gilead’s shift from HCV to oncology in the presence of growing competition and loss of market share and Vertex’s pivot to the cell and gene therapy space exemplify how diversification in technology types and disease categories is necessary for a company to continue to be an industry leader producing successful products.

In stock market investments, a balanced portfolio of stocks from different industries and of different risk levels is crucial for success. The gains from the winners in the portfolio help offset the costs from the losers. The same diversification principle could be applied to biotechnology companies and the R&D areas they choose to invest in. If a company were to produce one successful product and cease expansion into other disease spaces or product categories, the company could risk erosion by competitors or, eventually, generics. By investing revenues into therapies different from that of the original success, similar to the tactics of Gilead and Vertex, the company could expand its expertise and grow its consumer base.

Looking ahead, it will be interesting to see trends emerge in the ways that biotechnology companies invest their revenues. Will Gilead and Vertex succeed in their efforts to capitalize on their success from their HCV and CF drugs, respectively, and produce cutting-edge therapies in the cell and gene therapy (CGT) space? Or will their new projects fail, squandering millions of dollars spent on R&D?