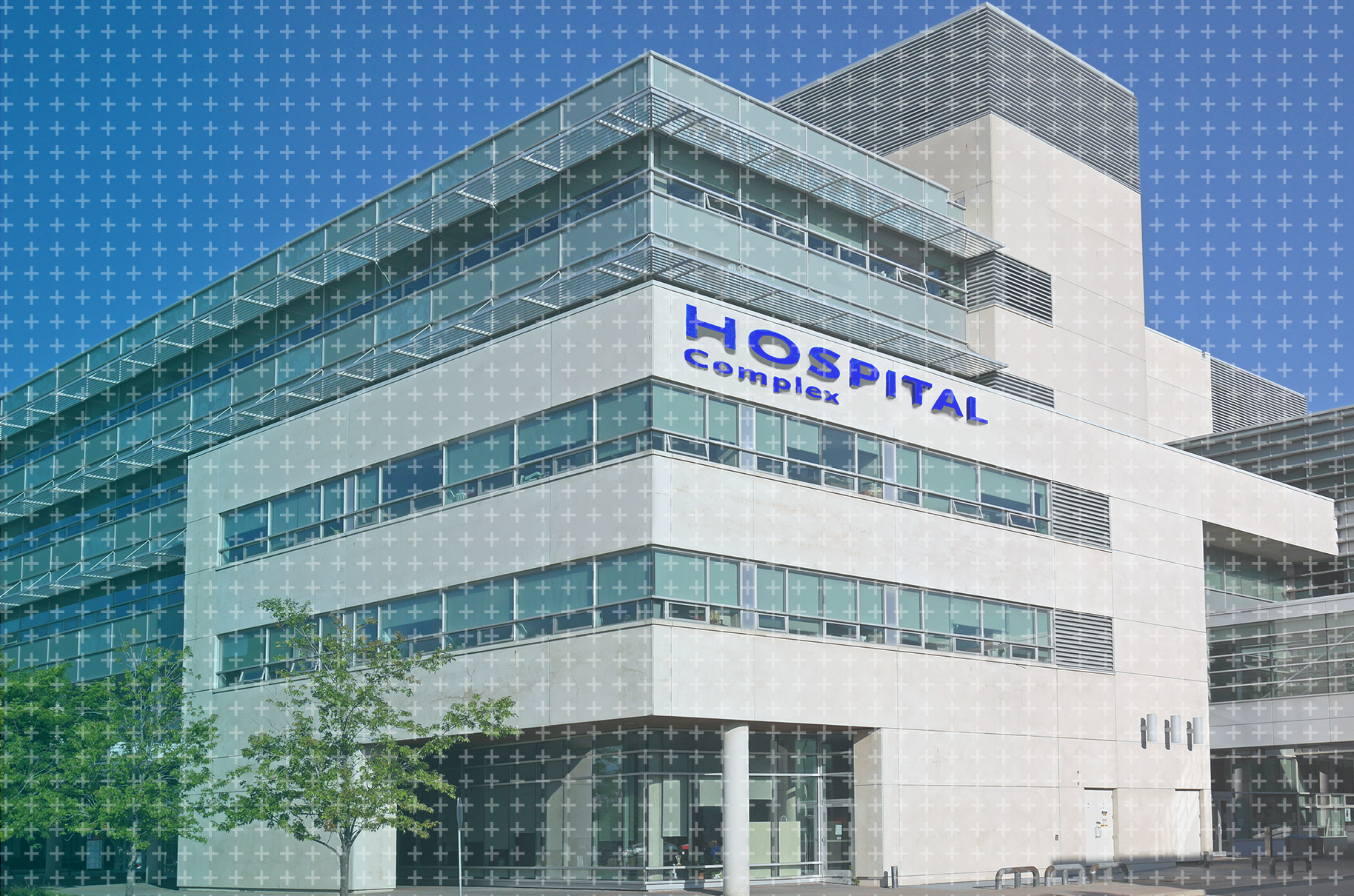 CBPartners’ Take: Although the rule increases hospital pricing transparency and grants American patients a better estimate of their hospitals costs prior to receiving care, low penalties, limited enforcement, and site of care loopholes lessen the impact of CMS’ Hospital Pricing Transparency Requirement. Despite the lack of adherence, the pricing lists posted by compliant hospitals provide a view into pricing decisions and negotiations that was previously unobtainable, allowing anyone to view the negotiated rates private insurance plans receive in comparison to the list and self-pay prices. The available lists show that there is no such thing as one price fits all in the American hospital.

Since January 2021, a Centers for Medicare and Medicaid Services (CMS) rule mandates hospitals publish gross prices and certain discounted prices for what CMS deems to be the most “shoppable” hospital services in a move to bring consumers greater clarity around the charges they receive from hospitals. The rule requires hospitals to publish machine-readable files detailing the gross charges, discounted cash prices, private payer-specific negotiated charges, de-identified minimum negotiated rates, and de-identified maximum negotiated rates for at least 70 and up to 300 common “shoppable” hospital services.

Controversially, the requirement to disclose negotiated payer-specific charges includes those from private Medicare Advantage and managed Medicaid payers. The mandate is part of a larger bipartisan push to extend financial protection to consumers in the healthcare sector and was followed with additional consumer protections in the No Surprises Act passed by Congress in December 2020, which banned unanticipated out-of-network medical bills or “surprise” medical bills.

The CMS rule “Price Transparency Requirements for Hospitals to Make Standard Charges Public” originated from a provision within the Affordable Care Act for hospitals to publish their “charge master,” or its list of standard prices for top services. Since patients rarely pay full price for hospital services due to insurance coverage and charity care, this original version was not insightful to most patients. In August 2019 CMS proposed an expansion of the ACA requirement to its current form, making it more relevant for most American patients by including both self-pay and insurer-specific rates. However, as insurers cover patients across a large range of plans, there is still much variability in the charges commercially insured patients receive that is not reflected in the updated requirement.

If hospitals fail to comply with the new rule, CMS can issue fines of $300 per hospital per day for a maximum penalty of $109,500 per hospital per year. Ambulatory surgery centers (ASCs) and physicians not employed by a hospital are exempt from the requirement due to the scope of the original provision within the Affordable Care Act. With over 8,000 ASCs in America and 30% of physicians employed by a hospital or hospital-owned medical group as of 2020, a sizable portion of care venues are not held to this pricing transparency standard. The combination of relatively low fines and the site of care / physician employment loophole lessen the impact of the requirement. This has not stopped hospitals from challenging the rule’s implementation in court.

Legal Action From Hospitals to CMS

In December 2019, the American Hospital Association (AHA) brought a group of hospitals together to challenge the CMS rule in court. The AHA argued that the transparency rule exceeded CMS’ statutory authority, violated the First Amendment, and was arbitrary and capricious under the Administrative Procedure Act. The AHA particularly fought against having to disclose payer-specific negotiated rates to the public. The federal court found that since third-party payer charges are the most common in hospitals, the standard charges described in the ACA created a legal basis for the expanded rule. The court also found that the requirements did not violate the First Amendment or Administrative Procedure Act. The AHA appealed the decision in District Court in June 2020 and again failed to persuade the court of a legal basis for halting the requirement’s implementation.

Despite the established legality of the requirement in court, there has been notably low adherence among hospitals, this is likely due to the arguably inconsequential fines.  As of January 2021, a Health Affairs study found that 65 of the largest 100 hospitals in America were noncompliant with the rule, with 18% of noncompliant institutions failing to post the complete required list at all or in the correct format and 71% failing to include payer-specific negotiated rates identified by insurer. CBPartners re-created the protocol for the Health Affairs Study in June 2021 with the five largest hospitals in America and found that two of the five remain noncompliant, only listing gross charges and excluding the expanded negotiated payer, self-pay, maximum, and minimum rates required by the rule.

Furthermore, hundreds of hospitals that have published their rates have blocked the information from appearing on search engines by embedding their websites with special coding, according to a Wall Street Journal investigation. Websites using the blocking code included some of the largest New York hospitals, such as those owned by NYU Langone Health. This adds an additional barrier to accessing the price lists, while hospitals are still able to circumvent the transparency rule.

As of June 2021, 41% of thirty-nine randomly selected New York state hospitals had posted prices for all five required categories. Using the compliant New York hospital price transparency postings, CBPartners analyzed the different levels of prices for a mammogram (CPT 77065 – unilateral diagnostic mammography) at sixteen hospitals and for chemotherapy infusion administration (CPT 96446 – chemotherapy administration to the abdominal cavity) at twelve hospitals.* Eleven of the sixteen compliant hospitals belong to the same hospital network and all had an academic or network affiliation. 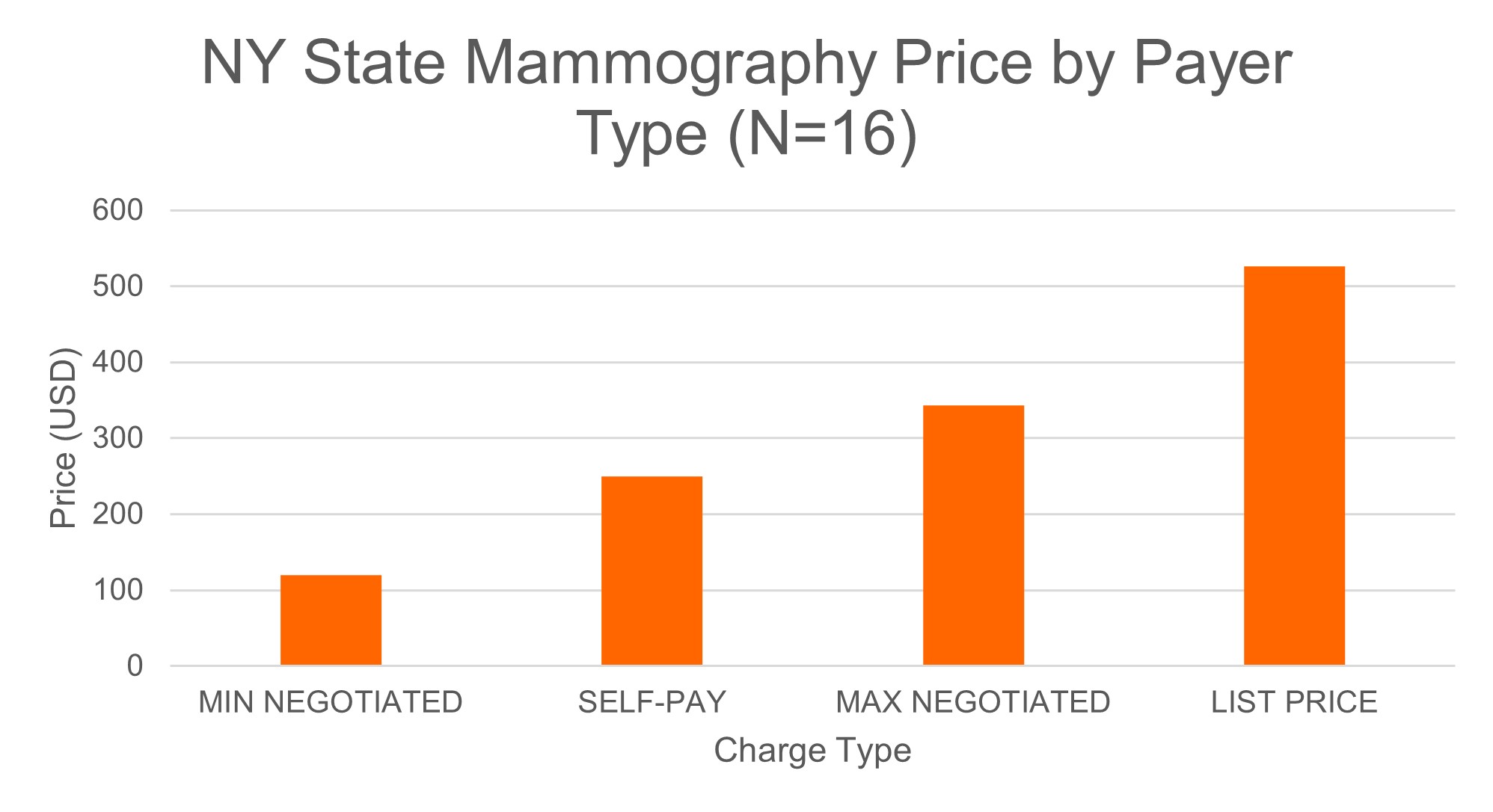 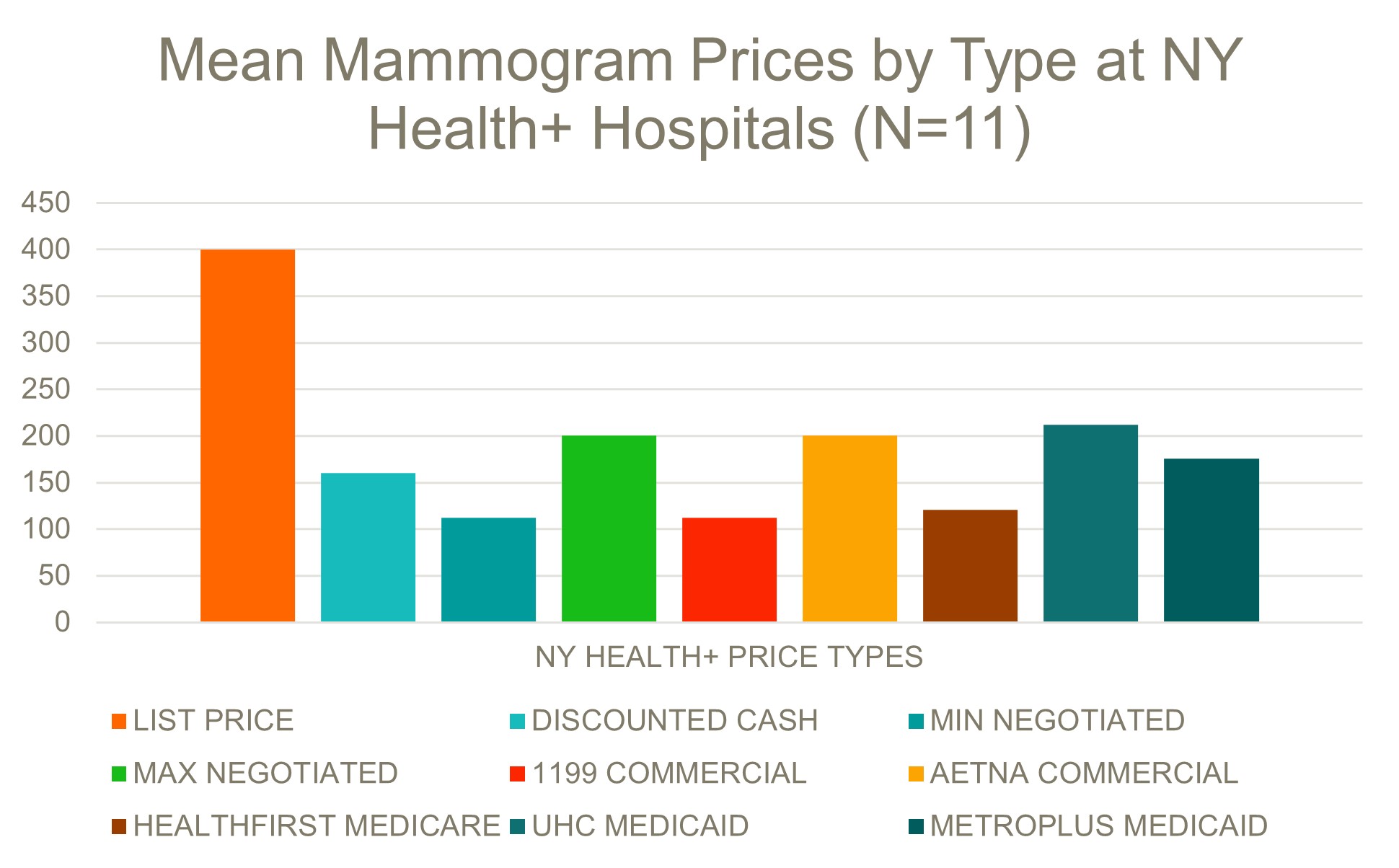 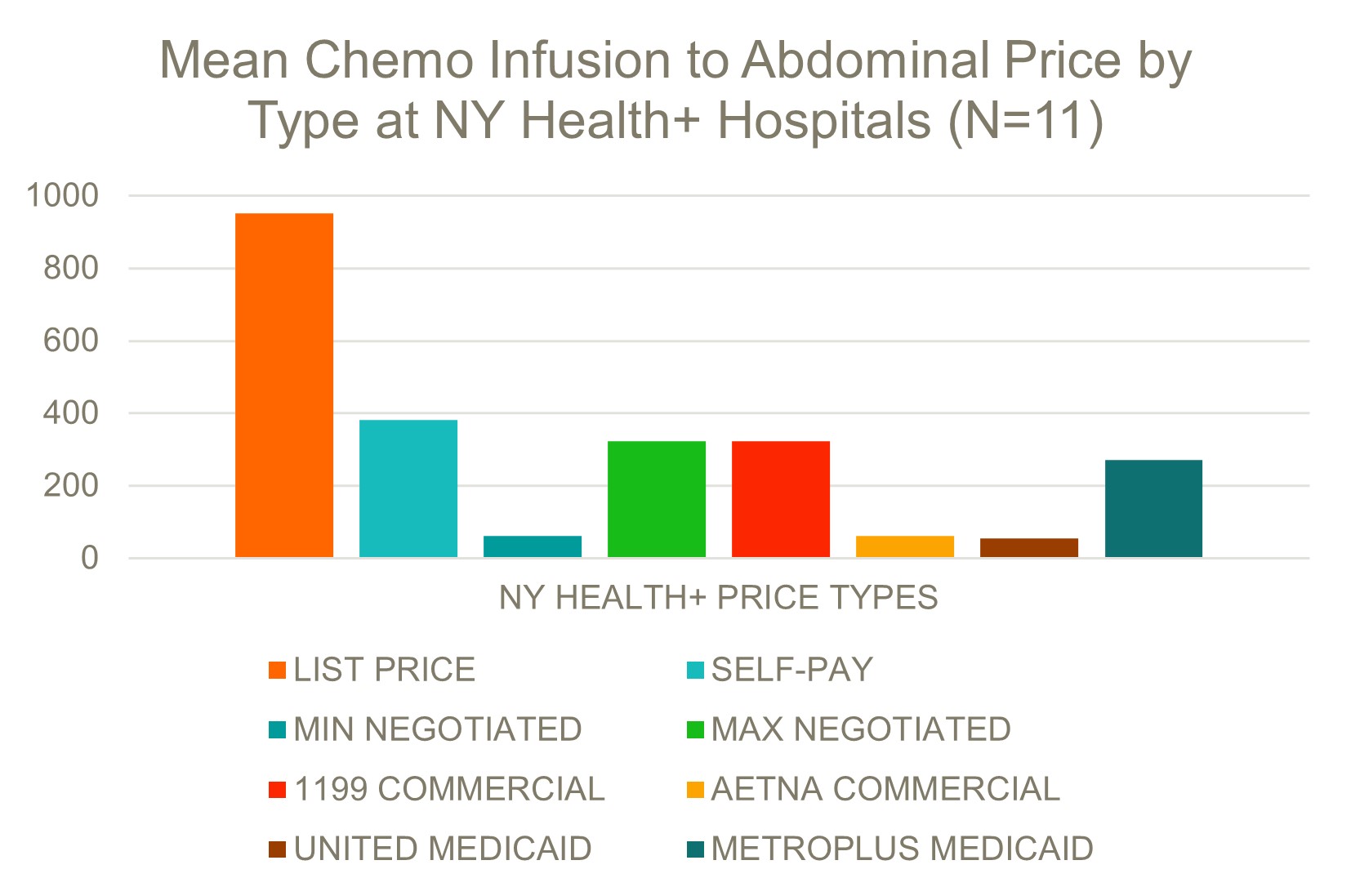 While CMS’ Hospital Pricing Transparency rule calls for an unprecedented level of transparency by requiring hospitals to publicly disclose third-party negotiated rates with commercial payers, the low adherence and unimpactful penalties leave the objectives of the rule unfulfilled. Additionally, in April 2021, the Biden Administration repealed a similar CMS regulation created by the Trump Administration that would have required hospitals to post privately negotiated rates with Medicare Advantage payers for inpatient hospital services. This repeal suggests awareness that the format of pricing disclosure requirements may not be as impactful as hoped.

Ultimately, private insurers are the entity gaining the most insight from the rule, not patients, on the rare occasion that hospitals are compliant, as insurers can see the rates of their competitors and walk into future negotiations with hospitals with this knowledge. However, without data for a larger set of procedures, it is impossible to understand the full network of hospital-payer negotiation as often these institutions engage in portfolio contracts.