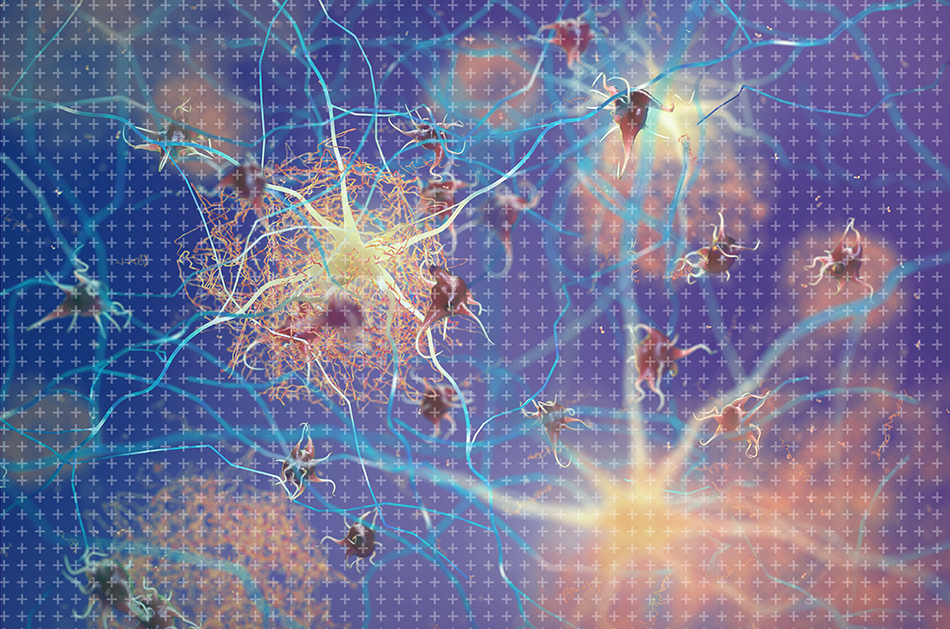 CBPartners’ Take: The approval of a therapy for the treatment of Alzheimer’s disease has been long awaited, and the approval of aducanumab has led to an outburst amongst the scientific community as well as the general public due to the uncertainty surrounding the clinical data and effectiveness along with its high price. Despite surpassing the challenge of FDA approval, aducanumab now faces the challenge of access, as some insurers have indicated they will not cover the drug and some hospitals have indicated they will not permit administration. With implications spanning across the entire healthcare sector, pharmaceutical companies should assess their own portfolios in Alzheimer’s and beyond in order to proactively address any potential concerns from key stakeholders regarding surrogate endpoints, approval against advisory committee recommendations, and the cost-benefit threshold. More specifically, we suggest further exploration of perceptions and outcomes as they relate to specific products / portfolios through analogue assessments, in-depth interviews with stakeholders, and additional analyses.

The Evolution of the Alzheimer’s Disease Landscape and Aducanumab

Since the release of the blog post ‘What’s Next for Alzheimer’s Disease?’ and podcast ‘Alzheimer’s and Aducanumab: The Beta Amyloid Theory’s Last Hope, the treatment landscape for Alzheimer’s disease has evolved. But the conversation around the pressure for approval as a means to advance research in a space with such high unmet need has continued.

Alzheimer’s disease affects over 6.2 million Americans and, at the time of the podcast, all the approved therapies were for symptom management rather than for preventing or slowing disease progression. However, on June 7th, 2021, the FDA granted aducanumab, marketed as ADUHELM, approval using the accelerated approval pathway, making aducanumab the first new Alzheimer’s drug since 2003 and the first monoclonal antibody targeting amyloid ever.

Despite overwhelming excitement of this ground-breaking news, the accelerated approval of aducanumab was a controversial decision from the FDA.. In March 2019, two identical phase III studies on aducanumab were terminated after an interim analysis showed the trials would miss their primary endpoints; however, later in October 2019, Biogen announced that the interim was incorrect, and a larger data set actually showed one of the two trials did in fact meet its primary endpoint.

While Biogen argued the discordant results may be due to a change in dosing during the study or a high number of rapid progressors in the other study that could have skewed results, the FDA advisory panel voted in November 2020 that the study data was not consistent enough to receive approval. Additionally, the advisory panel asked the FDA representatives whether they would consider amyloid reduction as a surrogate when making their decision and they stated they would not. However, against the panel’s recommendation, the FDA approved aducanumab, using the reduction of amyloid as a surrogate endpoint. This decision has spurred controversy, resulting in questions about the approval’s impact on payer coverage, the future clinical landscape, and the trust in the regulatory process. 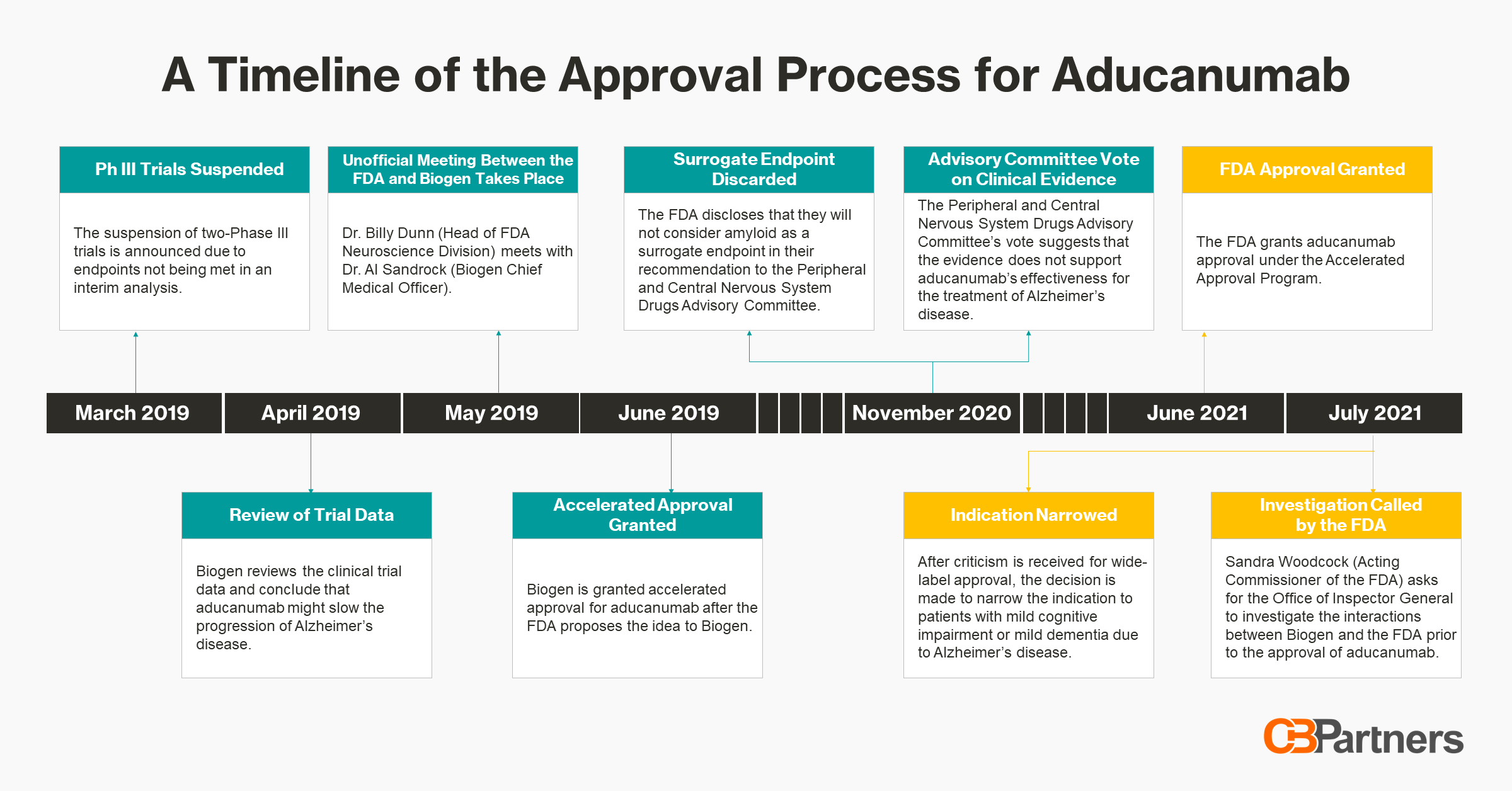 Although aducanumab passed the hurdle of FDA approval, it now faces the hurdle of payer coverage. Given its USD 56,000 per year price for the recommended dosage, certain insurers and hospitals have expressed hesitancy to either cover or administer the product.

Several hospitals, such as The Cleveland Clinic, Mount Sinai Health System in NY, Mass General Brigham in MA, and Providence in WA have announced they will not administer aducanumab, at least in the short-term, while the credibility of the FDA review process is in question. Mount Sinai Health System and Providence are awaiting results from the investigation by the Office of Inspector General, called upon by the FDA commissioner to decide whether they should allow doctors to prescribe the drug and to understand if the drug was evaluated appropriately. At The Cleveland Clinic, doctors will be able to prescribe the product, but administration would need to take place at an outside facility, as the center will not carry the drug at their pharmacy. This decision was made to err on the side of caution given the safety and efficacy data currently available for the product is insufficient.

The Centers for Medicare & Medicaid Services (CMS) opened a National Coverage Determination (NCD) analysis on July 12, 2021, which reviewed and determined the policy for monoclonal antibodies targeting amyloid for the treatment of Alzheimer’s disease. Commentary was collected from the public over a span of 30 days in mid-July to early August and the process included a review of the commentary, an assessment of the clinical evidence, and review of society guidelines. It aimed to establish if the drug fits within the Medicare coverage consideration, which is “limited to items and services that are reasonable and necessary for the diagnosis or treatment of an illness of injury.”

A proposed decision will be made within six months and a final decision will be made within nine months of the July 12th date, detailing their coverage policy for aducanumab. Although cost is not considered during the coverage determination process, the cost implications to Medicare would be considerable if aducanumab was covered. According to a Kaiser Family Foundation report, if Medicare pays providers at 103% of the WAC (wholesale acquisition cost) prior to ASP (average sale price) availability, and assuming 500,000 beneficiaries (a conservative amount in relation to the two million estimate reported by STAT news) are prescribed aducanumab, the annual total spend would be ~USD 29 billion.

This amount exceeds spending for any other drug, and for additional perspective, total Medicare spending for Part B drugs was ~USD 37 billion in 2019. Furthermore, patient out of pocket costs, if aducanumab was covered under Part B, would be 20% of the drug cost, which would amount up to ~USD 11,500 in coinsurance for one year of treatment. All in all, if covered by CMS, aducanumab  would have a sizeable impact on Medicare spending given most of the Alzheimer’s population is 65 and older.

Additionally, some insurers have also indicated that they will not cover aducanumab  due to its insufficient efficacy data. Various Blue Cross Blue Shield plans (e.g., BCBS North Carolina, Independence Blue Cross, BCBS Michigan, BCBS Western New York, BCBS Kansas) have announced they will not cover aducanumab, noting the inadequate evidence of clinical benefit as reason for doing so, and highlighting that it is not applicable for medical necessity. Additionally, Point32Health, the insurance company that was formed by the merger of Tufts Health Plan and Harvard Pilgrim Health Care, declared it will forego coverage of aducanumab or impose restrictions, such as periodic brain-imaging tests to demonstrate the drug’s effectiveness in the patient, if the cost is not lowered. Therefore, despite obtaining FDA approval, aducanumab must now overcome the challenge of access and utilization as insurers begin to make coverage decisions.

Impact of Aducanumab’s Approval on Future Therapies and Clinical Trials

Many experts are concerned that aducanumab ’s approval will provide an environment in which additional next-generation anti-amyloid therapies will be the focus while other therapies with potentially more consistent effects may be neglected. In a previous blog post about the future of Alzheimer’s clinical trials, the team provided several potential reasons as to why Alzheimer’s therapies in the pipeline kept failing, with the main one being an incorrect assumption that amyloid beta is the root cause of Alzheimer’s disease supported by mechanistic success without clinical benefit.

The scepticism surrounding this hypothesis alone is enough to question the approval and has led venture capitalists to question why other drugs that previously reduced amyloid plaques, but did not show cognitive benefit, were rejected. Thus, while approvals of the first drug in a therapeutic class usually increases investments and encourages innovation, the situation with ADUHELM and Alzheimer’s disease proves to be more complicated.

Along these lines, clinical experts worry that the approval will slow recruitment and support for other ongoing and future studies investigating Alzheimer’s disease, especially those with other mechanisms of action that may provide stronger evidence in demonstrating superior efficacy. Moreover, drug companies may seek to expedite approvals based on surrogate endpoints such as amyloid plaque reduction, rather than wait for larger clinical trials with more concrete evidence due to the success of aducanumab in achieving FDA approval. Finally, with the pathway to approval established for anti-amyloid drugs, recent shifts towards targeting other aspects of the disease, such as tau clearance, may halter. Eli Lilly, Roche, and Eisai all already have anti-amyloid antibodies in phase III trials, and many are in communications with the FDA about a pathway to approval.

In recent news, Quanterix and Cassava are battling over the science backing Cassava’s Alzheimer’s disease treatment, which tries to stabilize filamin A, a scaffolding protein, rather than clear amyloid plaques from the brain. The controversy stems from citizen petition claims over data anomalies and manipulations, and is propelled by Quanterix, a digital health company involved in laboratory work for the therapy, denying involvement in preparing some of the data in question despite Cassava’s claims. This dissent and skepticism of the therapies efficacy highlights that the high unmet need in the Alzheimer’s space has led to some spurious data.

Moreover, if these anti-amyloid drugs begin crowding the market, the need for better coverage and improvement in administrative burden / turnaround time on several diagnostic procedures (e.g., PET imaging of brain amyloid and blood tests for tau) will become a pressing issue. 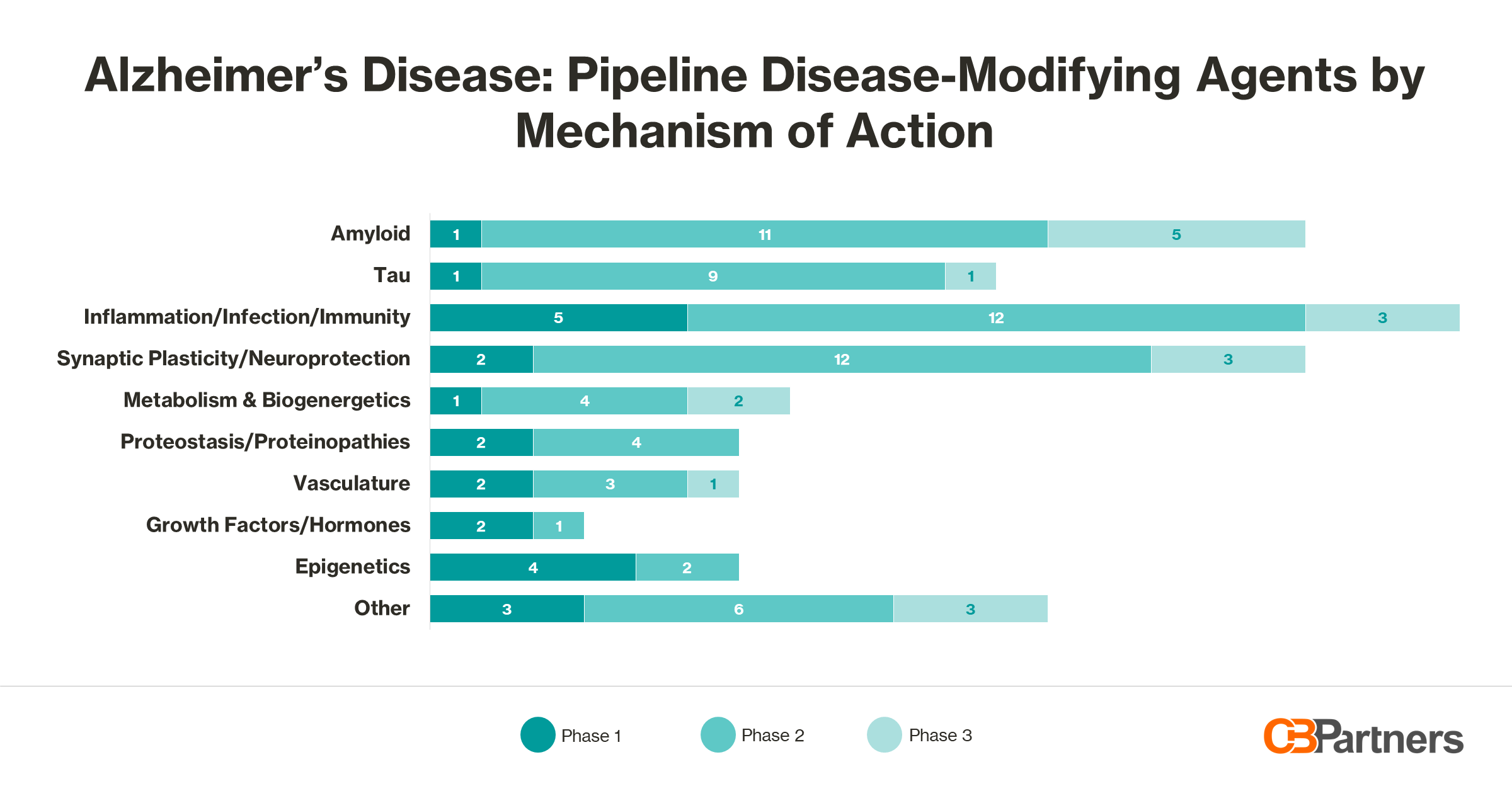 The FDA’s approval of aducanumabdespite the Peripheral and Central Nervous System Drugs Advisory Committee’s vote against the drug’s recommendation, along with the use of the accelerated approval program, calls into question whether the decision made by the FDA has been science-based or driven by politics. Janet Woodcock, acting Commissioner of the FDA, called for an investigation by the Office of Inspector General to review the agency’s approval process. Along with her request for inspection and the surrounding controversy, numerous Alzheimer’s experts have raised concerns over the drug’s approval. Furthermore, the resignation of three members of the advisory panel due to the lack of consideration / implementation of the scientific recommendations further highlights the scientific community’s frustration regarding the credibility of the decision. With wavering trust, many manufacturers are wondering what this might mean for future approvals in Alzheimer’s disease but also across portfolios.

What’s Next for Alzheimer’s and Aducanumab?

The implications of aducanumab’s approval may be wide-ranging, as the approval will impact payer expenditure, the current and future treatment landscape, and potentially trust in the regulatory approval process. Payers will have to balance a decision between allowing access to those that may benefit from therapy while also making sure spending does not grow to be exorbitantly high. Nonetheless, the question remains regarding what’s next for aducanumab – will PET scans be required and covered by insurers to minimize widespread use leading to high spending? Will the accelerated FDA approval be reversed? Will aducanumab become available in the EU? Only time will tell, as Biogen has already begun conversations with regulators across the globe, filing for approval in the EU, Switzerland, Canada, Japan, Australia, and Brazil. By filing for EMA approval in October 2020, three months after filing for FDA approval, the story of aducanumab will continue to unfold with an expected decision from EMA in Q1 2022.