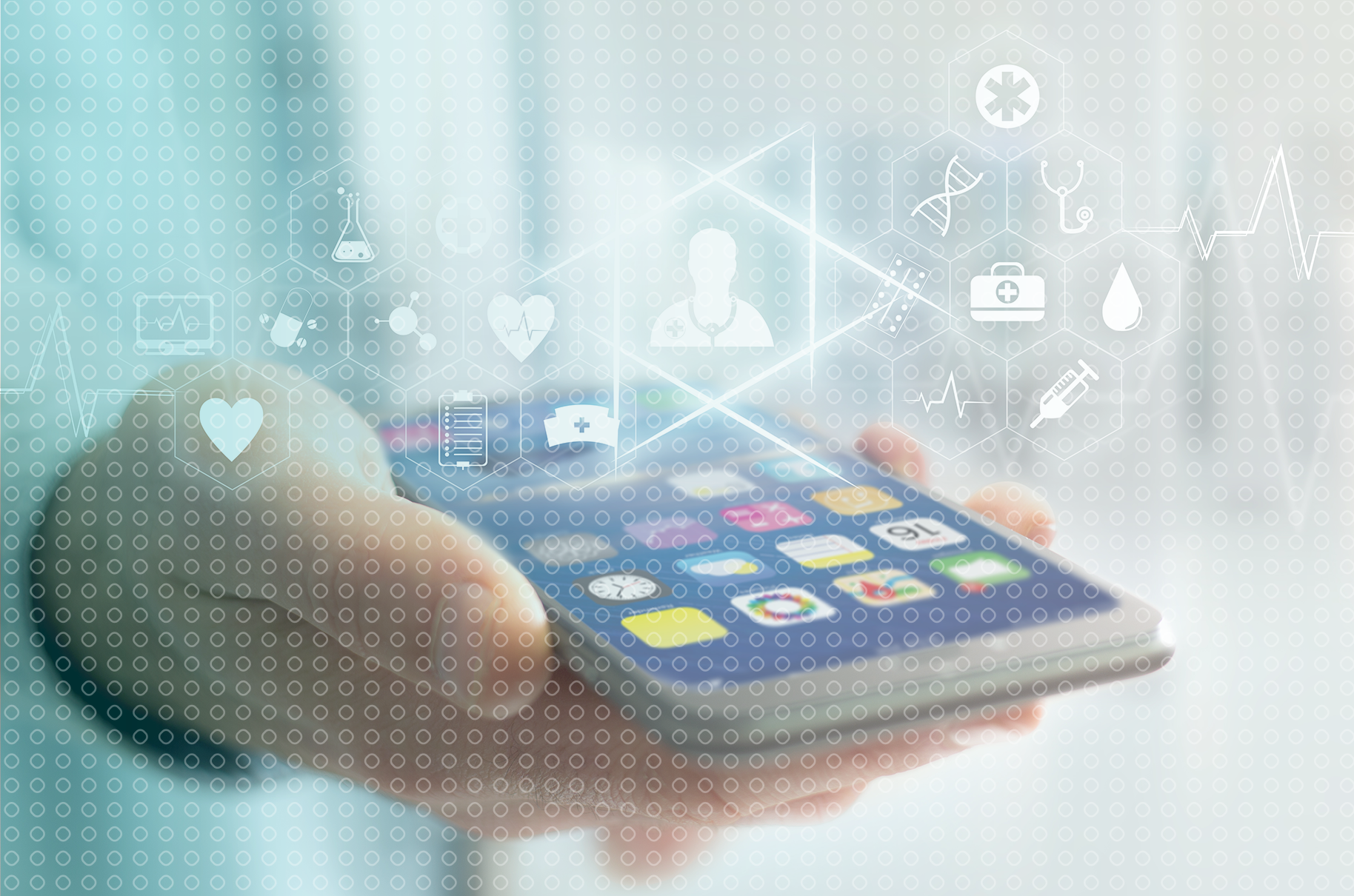 CBPartners’ take: Even in lieu of standardized coverage of DTx, manufacturers and their industry partners can capitalize upon pockets of high-value opportunity by prioritizing PBMs and employer groups, investing in executive-level relationships, and preparing targeted payer communications on clinical evidence, total cost of care impact, and risk-sharing agreements.

COVID-19 has brought about an unprecedented shift in the acceptance of digital technologies for healthcare applications. While it has been challenging in the past for digital therapeutics to build enough momentum to achieve coverage, payers’ appetite for digital solutions is certainly higher today than ever before. In a world where the number of DTx is rapidly increasing, it will be important for pharma and biotech companies to understand the range of possible access channels, especially as they consider DTx that can serve as digital companions to their drug portfolios (see Figure 1). 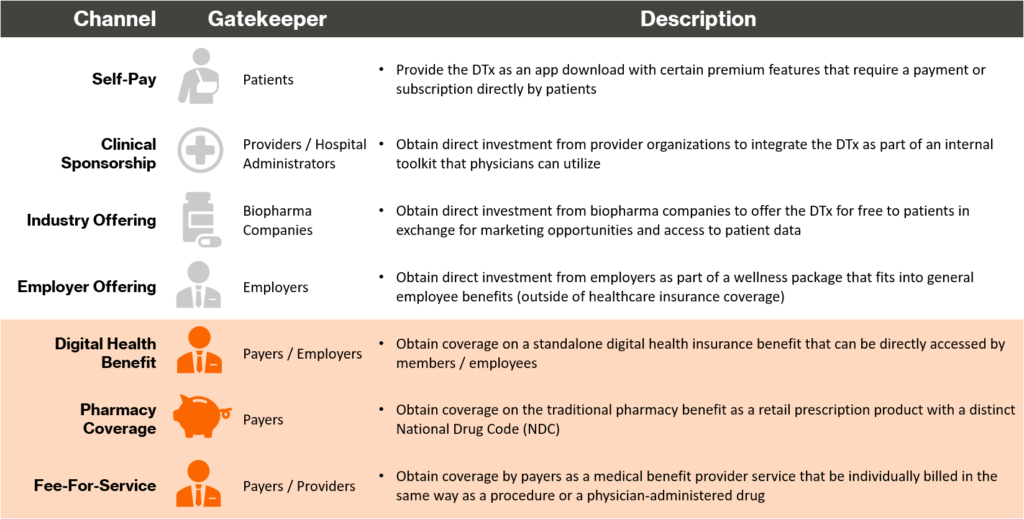 To acquire a deeper understanding of the three payer-influenced access channels highlighted above, CBPartners conducted primary research with N=5 commercial payers in May 2020. The research included organizations falling along a broad spectrum of DTx reimbursement experience in order to ensure a balanced set of perspectives on the key questions posed (see Figure 2).

1. What is the current payer mindset / approach to evaluating digital therapeutics?

“There are thousands of apps and digital tools out there. A lot of the decision-making is disease-state driven – diabetes, respiratory disease, and opioid addiction are the biggest ones right now. If a DTx came through that’s in a non-priority therapeutic area, it won’t automatically go through a review… but the manufacturer should feel free to reach out, and if there’s something there, maybe we would consider it.”

2. Who within the payer organization should be engaged about reviewing new DTx?

“We don’t have a formal review process yet for DTx – it’s so nascent that we’re just not there yet. Right now, DTx are going through one of the three possible channels – the clinical innovation committee, the non-clinical innovation committee, or the cost savings initiative committee. However, the vision of our marketing team is that they own our digital strategy, from Apple Watch apps to DTx. There are so many different opinions going around that you really need top-level buy-in to get any momentum.” 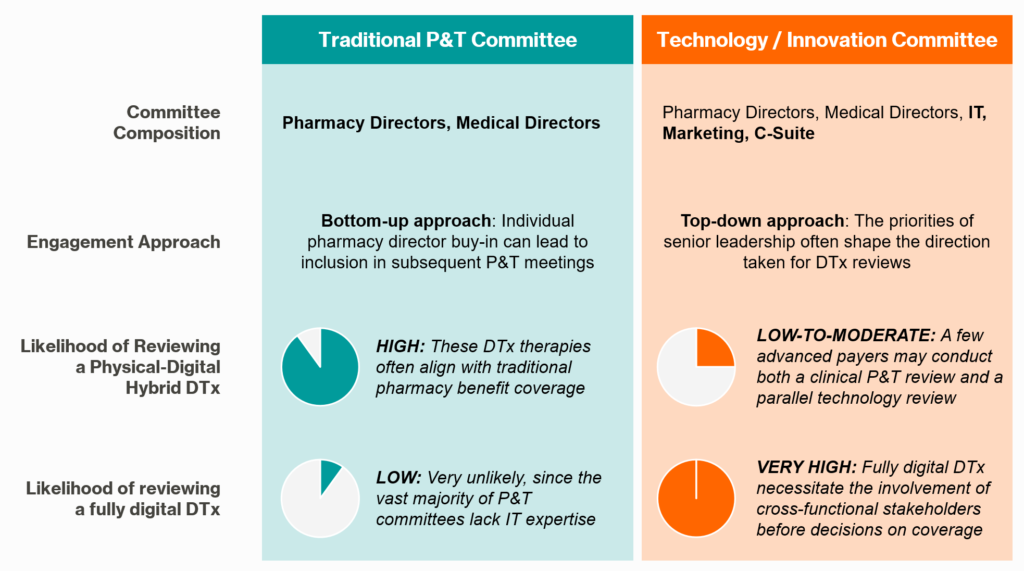 3. Once payers identify DTx of interest to review, how will they determine what evidence is necessary before covering it?

“The pilot phase is just to work through implementation steps with a limited number of physicians to see if there are any challenges or bugs to fix before a full rollout. We’ve learned not to pilot things to prove they work… it’s the same mindset for why we don’t like taking drug samples, as we don’t want dependency and familiarity to be the reasons why we choose to cover something.”

4. How will payers decide whether to cover DTx on the pharmacy benefit, the medical benefit, or as a separate digital health benefit?

“We’re skeptical about a digital formulary because it means that, like our traditional formulary, we would have to review all the DTx products that obtain FDA approval. We are not even close to the idea that every DTx deserves a review, and my impression is that a lot of the movement from PBMs on this has been marketing rather than well-thought-out business decisions.’’ 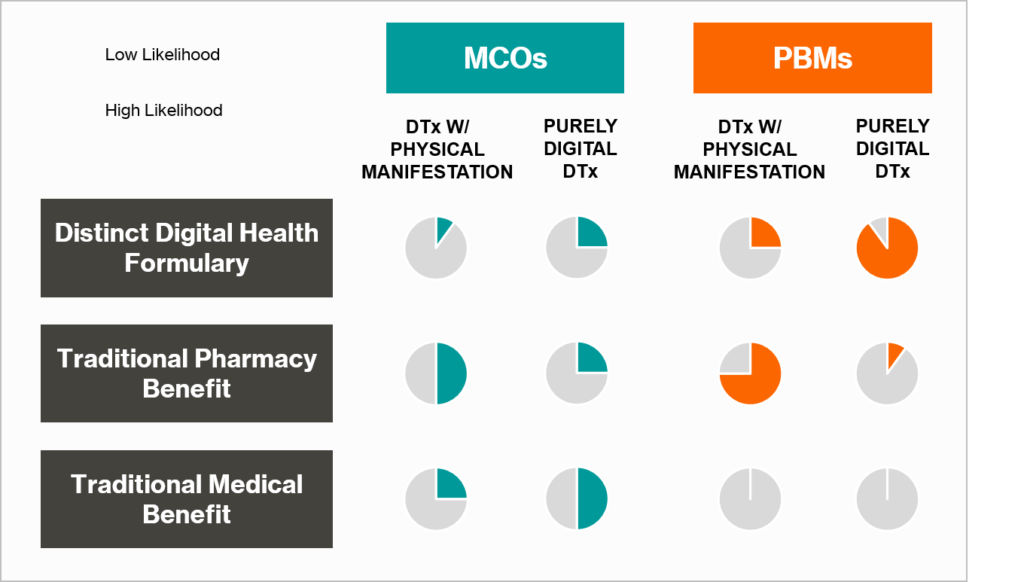 5. What types of pricing structures / models will payers expect for DTx?

‘‘When we ask DTx developers how many patients are currently using their app, they say 200 or 400 but then go on to make aspirational statements based on our millions of members. Given this, a best practice for these companies would be showing a willingness to enter into a risk-sharing agreement with the plan. We acknowledge that scaling up will be a challenge, and we don’t know what outcomes we’ll be able to see in the real world.”

The Outlook for Digital Therapeutics in a Post-COVID-19 World

If you liked this piece, stay tuned for part 2 of CBPartners’ digital therapeutics thought leadership, which will be focused on future commercial opportunities for digital companions.

If you are interested in reading more about the digital therapeutics landscape, read related posts in the expertise team’s thought leadership channel.